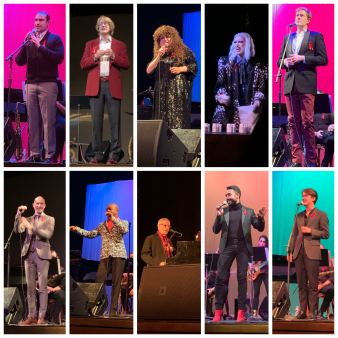 On World AIDS Day, The Red Ribbon Revue at the Abrons Art Center in New York City celebrated the work of HIV-positive songwriters and featured performances by artists who are living with the virus.

Hosted by Cecil Baldwin, the event was conceived by coproducers Sam Bolen and Brian Mummert as a way to fight the stigma surrounding HIV. Even though an HIV diagnosis is no longer a death sentence, stigma can keep people from getting tested and accessing treatment. The producers sought to give artists who are living openly with HIV a platform to raise their voices with the hope of dismantling that stigma as well as celebrate the lives they are leading.

Bolen spoke onstage about Michael Friedman, a composer, lyricist and cocreator of Broadway’s Bloody Bloody Andrew Jackson, who died at age 41 of AIDS-related complications. His death in 2017 shocked the theater world and sparked conversations about the virus, which many consider to be a manageable chronic condition. Friedman had been diagnosed with HIV only nine weeks before his death, which led to speculation that HIV-related stigma had prevented him from getting tested sooner.

Bolen was one of those who was shocked by Friedman’s death. After he was subsequently diagnosed with HIV himself, he recalled how he chose to be open about his status as a way of educating others and dispelling fears about the virus.

The Red Ribbon Revue raised funds for Broadway Cares/Equity Fights AIDS and mothers2mothers. The evening was a touching tribute that celebrated both those we’ve lost to HIV and those who continue to live with the virus.

Check out additional clips from The Red Ribbon Revue below.

Special guest Beth Malone sings “Someone Said” by Dick Scanlan and Jeanine Tesori in The Red Ribbon Revue. Scanlan has been living with HIV since 1983. #theredribbonrevue #worldaidsday #abronsartcenter #bethmalone

Brian Mummert sings “Sheridan Square” by Howard Ashman and Alan Menken. The duo is best known for their musical collaborations on animated films such as The Little Mermaid and Beauty and the Beast. Ashman died of AIDS-related complications at age 40 in 1991. #theredribbonrevue #worldaidsday #abronsartcenter #sheridansquare #howardashman

Sam Bolen does his rendition of “YMCA” by Jacques Morali and Victor Willis. Morali died of AIDS-related complications at age 44 in 1991. #theredribbonrevue #worldaidsday #abronsartcenter #ymca

Dimitri Joseph Moïse sings “Gimme Gimme” from the musical Thoroughly Modern Millie. Dick Scanlan, who wrote the lyrics, has been living with HIV since 1983. He was previously an editor-in-chief of POZ magazine. #theredribbonrevue #worldaidsday #abronsartscenter #thoroughlymodernmillie

Aaron Lee Battle sings “Where the Boys Are” by Neil Sedaka and Howard Greenfield. An American lyricist and songwriter, Greenfield died of AIDS-related complications at age 49 in 1986. #theredribbonrevue #worldaidsday #abronsartcenter #howardgreenfield #wheretheboysare

The performers of the The Red Ribbon Revue sing “The Best of Times Is Now” by Jerry Herman. The event was held at Abrons Art Center in NYC and raised money for mothers2mothers and Broadway Cares. #theredribbonrevue #jerryherman #worldaidsday #hivawareness