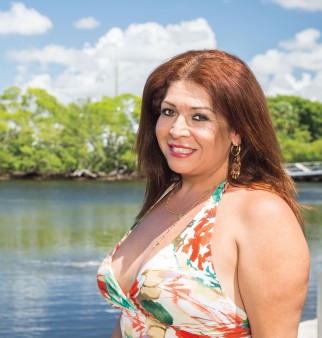 Lint, 43, is from Peru, where she graduated from law school. She was involved in political and civil rights activism and policy work in her native country throughout the 1990s, until threats against her forced her to leave.

Lint’s immigration has not been easy. “My ‘withholding of removal’ status doesn’t give me a chance to become a resident or a citizen,” she explains. That court order allows her to stay based on a high chance of persecution if she returns to Peru. “So every year, I have to renew my work permit. I cannot leave the country or access many services.”

In 2006, Lint tested HIV positive. She was living in Orlando, Florida, at the time, after a brief stint in New York City. At first, Lint lived in silence, thinking of her diagnosis as a sort of “divine punishment” for who she was.

However, through educating herself about HIV, Lint learned to shed the self-stigma she felt and became determined to live out loud.

“I was at a peer meeting, and a woman said to me, ‘You’re a lawyer in your home country? We need you!’ and I was in shock at that moment,” she says. “In my entire transgender life, nobody had ever told me they needed me.”

Lint works for the Florida Health Department, where she’s been for almost 10 years. She does public speaking nationwide and often facilitates classes on topics including trans issues, HIV in the trans community, workplace diversity and the need for trans mental health services. In addition, Lint does HIV testing along with pre- and post-counseling.

She has also built up an impressive advocacy and policy-making portfolio, working with groups such as ADAP, CHEERS for Peers, the Work Group for Transgender People in Florida State, the Broward County HIV Health Services Planning Council and Positively Trans (T+).

Lint serves as the East Coast cochair for the TransLatin@ Coalition and also as the CEO of the Arianna Center. She also finds time to contribute to a Spanish-language blog from The Well Project titled “Una Chica Como Yo” (“A Girl Like Me”), and she regularly organizes trans community-building and networking events throughout South Florida.

Her main goal moving ahead is to keep the Arianna Center going. She runs services from her home but is seeking a permanent location. “It will be the first center in South Florida where trans women can become empowered and work toward antiviolence and HIV prevention,” Lint says. “I’m not far from achieving that.”