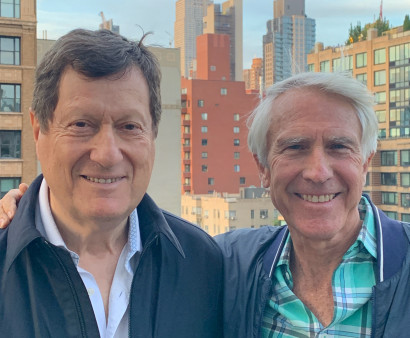 Derek Frost’s memoir, “Living and Loving in the Age of AIDS,” documents much more than his husband’s HIV journey.

English designer Derek Frost met his husband, Jeremy Norman, in 1977, as both were entering their 30s. On one level, the two enjoyed a charmed life, jet-setting across the globe and escaping to the English countryside when not living in London and reveling in the city’s thriving nightlife. (Norman founded the legendary gay nightclub Heaven, name-checked in the recent AIDS-themed TV series It’s a Sin, among other hot spots that drew bold-faced names of the day.) As evidenced in Frost’s memoir, Living and Loving in the Age of AIDS, the couple’s idyllic existence crashed in 1991 when Norman—whom Frost refers to as J—tested positive for HIV, five years before the advent of effective HIV treatment. 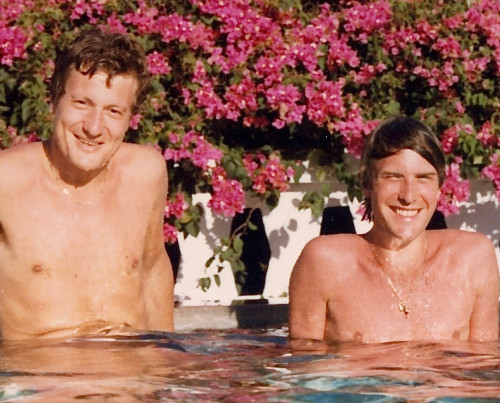 The diagnosis spurred both men to become AIDS advocates, not only for themselves but also for the global HIV community (they founded AidsArk, which helps people living with HIV in developing countries). To help him cope with his lover’s diagnosis and the ensuing trauma, Frost began keeping a journal, which was instrumental in penning his book. Equal parts love story, gay history and AIDS memoir, the book offers many pleasures and insights.

POZ emailed Frost about the book—you can read the Q&A titled “The One Essential Tool for Surviving the HIV Epidemic.” Below are four small excerpts the author selected to share with POZ readers.

How did I feel then, my darling husband, my J? Then, when I sat beside you, holding your hand, waiting to hear what the doctor had to tell us? Then, when the doctor told you that the virus killing so many of our young friends now inhabited you, that you were HIV Positive?

In September 1996, a real scare. Tests show that J has a viral load of 2.3 million. Dr Mike tells him it’s as high as he’s ever seen. Six months ago J’s viral load was 6,000. Stopping the drugs in July clearly wasn’t a good idea. This news makes us frightened.

Both 3TC and the new protease inhibitor, indinavir, have, thank goodness, quickly become available to all who are Positive in the UK and Dr Mike gives J his first prescription for triple combination ART. Dr Mike seems confident that taking these will quickly reduce his viral load. He cautions about the danger of developing resistance to ARVs and warns there must be no repeat of drugs holidays. If you stop taking ARVs, even for a day or two, particularly with regard to the new protease drug, there’s a strong chance they’ll stop working for you.

That same month, J takes his first ART pills. It’s a big decision. He now understands that it’s a lifelong commitment. We now hang on to the strengthening voice that tells us the dying is going to stop. We start to believe that the medication which will be our salvation has finally arrived.

By November, J’s viral load has dropped from 2.3 million to 1,200. His CD4 count has risen to 170. In combination, the new protease drug really works. Only two months and such a dramatic fall in viral load. From Dr Mike: “I now expect that you will be alive in 15 years.”

Can we be so lucky? Will J be in the first rank of Positive people who will live a full term of healthy life while still carrying the virus in them? It is beginning to look that way.

The weight of impending doom lessens, and the feeling of lightness and gratitude is immense. Also there is sadness. So many of our friends were less lucky and are dead. 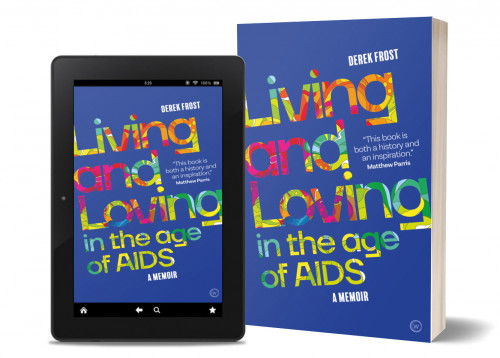 It’s January 1997 and, for us and our friends, the miracle we had all hoped for starts to unfold. ART [antiretroviral therapy] is proving effective. The arrival of ART is an incredible relief to us, to our surviving friends and to so many others like us. We start to breathe again. The relentless attack on J’s immune system lessens and stops. He can actually feel this happening. His life force strengthens and his immune system slowly starts to rebuild. His CD4 rises to 198. His viral load continues to drop. We hear the same from all our Positive friends. For those who are lucky enough to be able to access ART, it appears that the dying will end. We feel a great debt of gratitude to the scientists who have developed these drugs, to the drug companies who made them available and to the UK taxpayer who funds our NHS.

So effective is the triple drug combination that many describe taking them as “The Lazarus Effect”—dying people climb out of their death beds and become healthy again. It’s a miracle.

“Fucking without Fear” is the mantra of a new generation of young, sexually active people from some of the richer parts of the world. It describes a sexual freedom made possible by Pre-Exposure Prophylaxis (PrEP). Take PrEP, the identical ARVs you take if you’re Positive, and you can stop worrying if you or your sexual partner are Positive or not; you can forget about using a condom and about safe sex. If you’re negative and on PrEP you won’t become Positive if you’re exposed to the virus. If you’re Positive and [maintain and undetectable viral load by taking daily meds, then] you can’t infect others. Some of the world’s richer countries now make PrEP available on demand and free of charge.

Although PrEP was approved by the US Federal Drug Administration in 2012, cost and lack of availability prevents many people around the world accessing it. If PrEP was freely available worldwide and taken by all sexually active people, AIDS would quickly cease to exist.

Science is working hard but has still to develop a vaccine to prevent HIV infection. However, in the early months of 2019, there was exciting news that a British man, only the second in the world, had been “cleared” of HIV. This Positive man received a stem cell transplant from a donor with a rare genetic mutation which prevents HIV from entering human cells.

This Positive man no longer takes ARVs, his viral load remains undetectable and he is deemed to be in full HIV remission: no longer Positive.