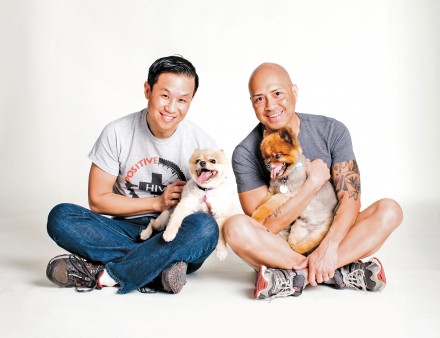 An exhibit of ‘When Dogs Heal’ their HIV-positive owners

In 2006, Robert Garofalo was diagnosed with cancer. Shortly after that, his decade-long relationship ended. But nothing, he says, compared to testing positive for HIV in 2010. Although he’s a doctor who specializes in HIV, Garofalo felt himself becoming isolated and depressed. Then hope arrived in an unexpected form: a 10-week-old Yorkshire terrier he named Fred.

Realizing that countless folks living with HIV have gone through similar experiences, Garofalo teamed up with fine-art dog photographer Jesse Freidin and writer Zach Stafford for a project called When Dogs Heal.

Traveling to five cities—Atlanta, Chicago, Los Angeles, New York and San Francisco—the trio documented in photographs and words the healing power of the pooch. Collections of the images and accompanying stories were recently exhibited at the LGBT Center in New York City and two galleries in Chicago.

“The response has been astounding,” says Garofalo, whose day job is working as the division head of adolescent medicine at Lurie Children’s Hospital of Chicago and as a professor of pediatrics at Northwestern University. “I’m getting hundreds of emails from people all over the world.”

What makes the project so special, he believes, is that you have “these very sweet and in some cases whimsical and charming images that are coupled with raw and very powerful stories.” Such as Brad in San Francisco, who was a meth dealer and user until his dog helped him get clean. Or Paulo in Chicago, who acquired HIV through a gang rape. “They’re unbelievable stories,” Garofalo says, “but they’re each wedded in love and hope. And that’s amazing.”

The project accomplishes another goal, Garofalo explains: “The project changes the narrative around HIV from being one of illness and stigma to being one of surviving and thriving with this disease, not just battling it.”

Garofalo and his canine crew are expanding their work, with hopes of printing a book and including other illnesses. (When Dogs Heal is a project of Fred Says, a charity Garofalo founded that has raised nearly $150,000 for HIV-positive youth through selling merch featuring his lovable dog.)

Want to tell your amazing story? Visit wdhproject.org, where you can share your own four-legged tale and pics.