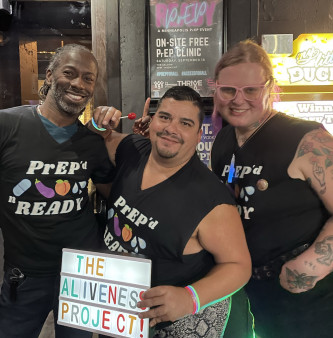 The Aliveness Project’s Thrive clinic in Minneapolis covers the cost of PrEP, lab tests and STI and HIV screenings.

Minnesota’s first free PrEP clinic opened this month in Minneapolis, offering services for pre-exposure prophylaxis, the highly effective daily tablet that prevents people at risk for HIV from contracting the virus. Free PrEP is available from the Thrive clinic, part of the HIV organization the Aliveness Project.

Thrive will help cover the expense of the medication in addition to the required lab work and tests for sexually transmitted infections (STIs), according to a press release from the Aliveness Project.

Aliveness and Thrive staff celebrated the launch with a party called PrEP’d & Ready at the LGBTQ bar The Saloon. The event included an on-site PrEP clinic, cake, drag doctors, go-go nurses and loads of fun. By the end of the night, 15 people had signed up for Thrive’s PrEP clinic and left with a seven-day starter pack of Descovy for PrEP, Dylan Boyer, the event and communications manager at the Aliveness Project told POZ.

In the United States, PrEP is available as the daily tablets Truvada and Descovy; both are manufactured by Gilead Sciences and consist of two meds. A generic version of Truvada became available in fall 2020. To learn more, see “Cheaper Generic PrEP Now Available in the United States,” “What’s the Difference Between Truvada and Descovy for PrEP?” and “Prevention: Generic Truvada.” For more general information, see the POZ Basics on HIV Prevention.

The availability of lower-cost generics might actually be bad news for HIV prevention efforts because of a federal drug pricing law called 340B. For background, see “Generic PrEP Highlight How Even Low-Cost HIV Care Relies on High Drug Prices” and “PrEP Programs Face Devastating Loss of Funding for HIV Prevention.”

“Expanded free access to PrEP medication and lab costs is a vital component in breaking down barriers to care and bringing us one step closer to ending the HIV epidemic,” said Matt Hoppe, the director of clinical services at the Aliveness Project, in the group’s press release.