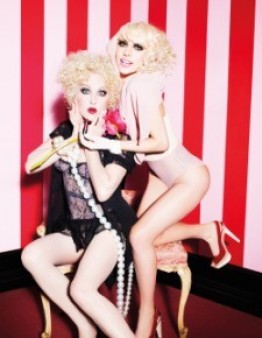 Cyndi Lauper and Lady Gaga glam it up for MAC’s “From Our Lips” campaign.

Puckering Up for AIDS Awareness

At the age of 23, Grammy-winning pop sensation Lady Gaga is already many things: She’s a singer, a songwriter and a dancer whose eccentric public persona is matched only by her off-kilter fashion sense. Since bursting into the mainstream in 2008, she’s already become an outspoken AIDS advocate, taking the stage at HIV/AIDS benefits and supporting AIDS service organizations in the United States and abroad.

Her alignment with this cause made her a perfect spokesperson for M·A·C Cosmetics’ M·A·C AIDS Fund (MAF), which has, since 1994, raised more than $150 million for HIV/AIDS programs through sales of its Viva Glam lipstick and lipglass. This year, Gaga joins longtime AIDS advocate and fellow Grammy-winning artist Cyndi Lauper for “From Our Lips,” the latest Viva Glam campaign and the first to focus on women and girls. All proceeds from sales of Viva Glam Cyndi (light coral red) and Viva Glam Gaga (light blue-pink) lipsticks, each $14, will benefit programs that address gender inequalities, domestic violence, discrimination and other factors that put women at risk for HIV.

“I really don’t feel that there are enough women that are really educated about AIDS: how quickly it’s spreading, how dangerous it really is [and] how many people really have it,” Gaga told Good Morning America last month. “And we want to do good jobs as women who represent a sexual community and a strong, independent group.”

MAF has also recently released data from nationwide surveys on women and HIV, which found that nearly 55 percent of American women said they’ve never been tested for HIV, while 78 percent said they’ve had sexual intercourse without a condom. About 73 percent of women likely don’t know their HIV status either because they’ve never gotten tested or because they can’t remember how long it’s been since their last test.

Why is “From Our Lips” such an important campaign in 2010?


Well, there are a couple of issues. As you know, the number of women living with HIV in the United States has tripled since 1985. I think there is a misconception that here in the United States we have generally beaten HIV, and/or that HIV is only an issue among men who have sex with men (MSM) or in DC and Harlem. And that’s simply not the case.

I do want to emphasize that MSM continue to have the largest HIV infection rate in the United States—and that’s still an area that we’re very concerned about, and that the nation needs to be concerned about. But what we’re trying to do here is literally and figuratively grab the microphone and have two women who are very powerful—and who are rock stars—talk to women about how much of a concern this is. People listen to rock stars in a way that they don’t listen to the surgeon general.

And we’re really hoping to both sell a lot of products so that we can give money away to HIV services. AIDS is a great friend to inequity, and women and girls have their shares of inequities. So we’re funding programs that address those inequities, whether it be around violence or whether it be around lack of economic resources.

The pairing of Cyndi Lauper and Lady Gaga is a unique one. How did that come about?

Well, our spokesmodels always approach us, which is great. James Gager, who’s our creative director, and John Demsey, who’s the head of the brand, ultimately choose them, although we certainly have a lot of discussions about it. But Gaga and Cyndi are both strong, sexy women, and they’re a great yin and yang as far as book-ending the HIV epidemic. Unfortunately, I think, too many people think that there is no real discussion going on right now about HIV. And so to kick-start the discussion we have one woman who’s been part of the discussion from the very beginning, and one woman who is a social and music phenomenon saying that it is an important issue.

On the same day that this new Viva Glam campaign launched, MAF released survey results that brought to light some alarming statistics about the misperceptions surrounding HIV/AIDS among women. Did these results surprise you?

I think three out of four women not knowing their status is a shocker. One of the main issues that we’ve heard from our grantees—who are women living with HIV and women working with women who are at risk—is this whole notion of the need to mainstream HIV testing and care. And I say this as someone who was [involved] very, very early on in the age of AIDS exceptionalism, when we had to really focus on confidentiality and privacy. And what we’ve seen is, unfortunately, it’s been segregated out. So to get a test, you really have to ask, and often, doctors say, “What have you been up to?” and it’s created a situation where HIV has been segregated. And it’s a real problem particularly for women, because so many women only seek health care around reproduction and pregnancy protection. So it’s startling.

And is speaking up on behalf of one’s sexual health and being one’s own best advocate one of the main takeaway female empowerment messages of this initiative?

Yes, and I think it’s also about making health care providers aware of the need to give the test.

What sort of change do you hope this campaign and these survey results inspire?
I think similar to the way that we’re looking at HIV within the larger context of health care, we need to look at HIV more holistically and say, “What are the drivers?” They call it “combination prevention.” The way we’re looking at combination therapy, we need to look at combination prevention and look at the many factors that make people vulnerable to HIV infection.

What makes lipstick such a great way to raise funds for HIV? It definitely seems to work in M·A·C’s case.

The reason why it works is that it’s sexy, it’s playful and, at this point in the recession, it’s guilt-free shopping. All $14 goes to the fund, and it’s a great product.

Also a lot of these [consumer-based initiatives] can be either boring or too heavy. Why not be glamorous and have fun? And I think to the extent that HIV prevention has failed is because it’s too much about finger wagging and being sent to the principal’s office. It’s too dry.
And M·A·C has certainly never been about wagging fingers, especially in terms of spokespeople. The campaigns always have an edge.

And I think what we’re trying to do in this campaign is similar to the way we’ve embraced gay men and drag queens [RuPaul was the first Viva Glam spokesperson]. They’re part of our family at M·A·C, and just as we’ve hoped to have them protect themselves by increasing self-esteem, that’s what we’re doing with women now. No minority has a lock on lousy self-esteem. And we are really here to celebrate women and ask them to protect themselves. I don’t think we could have had better partners than Gaga and Lauper. And in the first four days of sales, we sold half a million dollars worth of lipstick.

Wow.
We literally sold out online and needed to restock.