Researchers think a more efficient means of modifying immune cells to resist the virus could  yield a stronger effect.

Editing the genes of CD4 cells to make them resistant to HIV infection succeeded in delaying viral rebound among participants in a recent small study. Specifically, researchers sought to disrupt the CCR5 gene, which gives rise to the coreceptor of the same name on the surface of immune cells. Most HIV attaches to this coreceptor to begin the process of infecting the cells.

Pablo Tebas, MD, a professor of medicine at the Perelman School of Medicine at the University of Pennsylvania in Philadelphia, presented findings from the study at the 2019 Conference on Retroviruses and Opportunistic Infections (CROI) in Seattle. He and his colleagues used the zinc finger nuclease (ZFN) technique of modifying CD4 cells to deactivate the CCR5 gene. 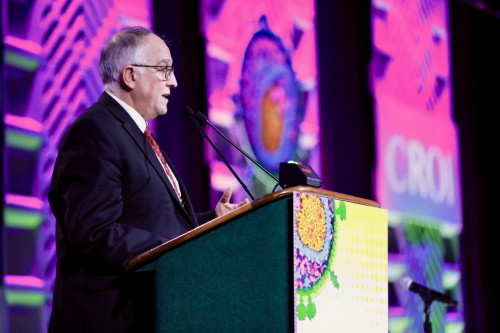 Pablo Tebas of the University of Pennsylvania at CROI 2019Benjamin Ryan

They specifically sought to determine whether what is known as the RNA-based transfection method disrupts CCR5 genes to a similar extent as previously seen with a so-called Ad5/35 vector.

The study also sought to determine the safety and tolerability of a single dose of the RNA-based transfection product; whether a single dose of the drug cyclophosphamide (CTX) improves the ability of edited immune cells to engraft into the body’s immune system after they are reinfused into the body; and whether people who have one copy of the CCR5-delta32 mutation (making them heterozygous as opposed to homozygous, should they have two copies), which yields a defective CCR5 coreceptor, are more likely to benefit from the reinfused, edited cells.

The researchers conducted a three-arm open-label pilot study of the safety and antiviral activity of a single infusion of CD4 cells that had been drawn from each of the 14 participants and modified at the CCR5 gene with the ZFN therapy. The three participants in Cohort 1 received the ZFN treatment with no CTX. Cohort 2 included six people who had the normal, or wild-type, CCR5 gene while Cohort 3 included five people who were heterozygous for CCR5-delta32. The members of Cohorts 1 and 2 received one of two different doses of CTX.

The participants all had HIV that was well controlled with antiretroviral (ARV) treatment. Eight weeks following the ZFN treatment they underwent a 16-week analytical treatment interruption (ATI), during which they were taken off ARVs and closely monitored.

Ninety-three percent of the participants were male. Fifty-seven percent were Black, 43 percent were white and 7 percent were Latino. They had a median age of 44 years old. Their median baseline CD4 count was 831.

The median proportion of CD4 cells that had the modified CCR5 gene one week after the infusion was 7.4 percent.

During the 16-week ATI, engraftment of the modified cells varied between the groups. There was a trend toward greater early engraftment in the groups that received CTX; this trend was statistically significant among those in the delta32 group compared with the control group, meaning it could not have occurred by chance.

Almost all of the participants’ virus rebounded quickly during the ATI. However, when compared with the viral rebound rates expected during an ATI based on data from the AIDS Clinical Trials Group, the treatment was still associated with a delay in viral rebound, defined as a viral load above 200.

“We saw a little bit of a delay,” Tebas said at a CROI press conference. “Is it dramatic? No.”

Among those in Cohort 3 there was an apparent trend toward those who were heterozygous for CCR5-delta32 experiencing a greater delay to viral rebound. Additionally, a subset of Cohort 3 maintained a low viral load during ATIs that lasted up to 40 weeks.

The CTX dose was not associated with a difference in the time to viral rebound.

The study authors concluded that a more efficient modification of the CCR5 gene groups could potentially benefit more people who receive this experimental treatment.