There’s more to consider in Georgia than this week’s runoff elections—for example, its HIV epidemic and LGBTQ health equity.

LGBTQ Georgians are more likely to be living with HIV than their counterparts in other Southern states. That’s one key finding from a survey on the health of Georgia’s LGBTQ population; a related report highlights the data as the nation turns its eyes to the state and its January 5 runoff elections—races that will decide which party controls the U.S. Senate.

The findings come from The Report of the 2019 Southern LGBTQ Health Survey. The survey included more than 5,600 LGBTQ people across the region, including 350 in Georgia. Over 425,000 LGBTQ people live in Georgia, according to a press release about the report, which was produced by the Campaign for Southern Equality and Western North Carolina Community Health Services.

A supplement to the survey focuses on Georgia respondents. A section about HIV reads:

This South is the modern-day epicenter of the HIV crisis in the United States. Participants of the Southern LGBTQ Health Survey reported disproportionately high rates of living with HIV. Of our full survey sample, 5% indicated that they were living with HIV, four points higher than the general U.S. population.

HIV rates were slightly higher in Georgia than the overall sample, with 8% of respondents from Georgia living with HIV. Trans Georgians and Georgians of color were more likely to be living with HIV than cisgender and white respondents. Georgians also report being less knowledgeable about HIV prevention than our overall sample, with roughly 20% of LGBTQ Georgians reporting fair or poor knowledge of HIV prevention compared to 16% of the general sample. This was especially true for trans participants from Georgia.

Data from the Centers for Disease Control and Prevention (CDC) back up the survey’s findings. For example, in 2018, Georgia ranked fourth in the nation in new HIV diagnoses, with 2,501 cases. (California was first, with 4,712, followed by Florida with 4,573 and then Texas with 4,388.)

A Georgia Department of Public Health report on the state’s HIV care continuum—which the CDC defines as the series of steps from the time a person is diagnosed with HIV through the successful treatment of the virus with HIV medications—showed that of 57,824 adults and adolescents living with diagnosed HIV in 2018, 69% had received any care, 52% were retained in care and 55% were virally suppressed, also referred to as having an undetectable viral load. (For more about this, see the POZ Basics on HIV/AIDS, notably the section on Starting HIV Treatment.)

Returning to the 2019 LGBT health survey, other key findings in Georgia include:

Given this last finding, LGBTQ Georgians will likely let their political views be known when they cast their vote in the January 5 runoff. 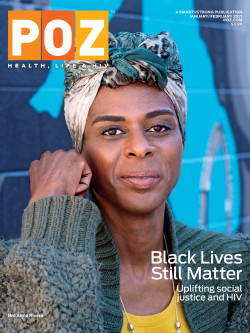 The January/February 2021 cover of POZ

In related news, see “Three Demands From the HIV Leaders of Black South Rising” and POZ’s current cover story “Black Lives Still Matter.” To read a collection of HIV-related stories about Georgia and the South, click #Georgia and #South.