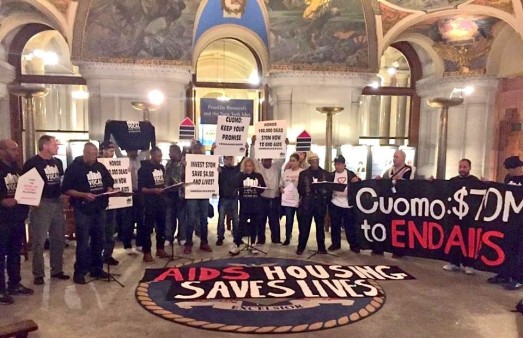 Activists occupy the “War Room” of the N.Y. Capitol to ensure the state budget includes $70 million to end AIDS. Courtesy of VOCAL-NY

Getting Arrested to Support the Blueprint to End AIDS

At least six AIDS activists were arrested at the New York Capitol after they occupied a suite and demanded funding for the Blueprint to End AIDS, reports Gay City News.

On Monday, March 28, a group of activists representing several organizations took over a suite nicknamed “the War Room” and held a rally to pressure Governor Andrew Cuomo to include $70 million in the state budget to fund efforts to end AIDS by 2020. Cuomo had already endorsed the so-called Blueprint to End AIDS, but advocates say his support has waivered. The state budget is due April 1.

Amid chants of “Invest millions, save billions and save lives,” the activists and supporters read a list of the names of 100,000 New Yorkers who have died of AIDS-related illness. When the Capitol shut down for the night, the advocates vowed not to leave. Six people from Voices of Community Activists & Leaders (VOCAL-NY) were arrested.

Activists returned to the War Room the next morning to continue the vigil of reading the names.

This was one of several actions throughout the state by Housing Works, VOCAL-NY, AIDS Service Center NYC (ASCYNYC) and others.

For more details about the protests and budget, click here to watch a Capital Tonight interview with Jason Walker of VOCAL-NY and Carmelita Cruz of Housing Works.

For a VOCAL-NY press release on the budget protests, click here.

For more on social media, such as these tweets, search #ENDAIDSNY2020.

Cuomo cannot expect us to stand by helplessly as he goes back on his own commitment #ENDAIDSNY2020 @housingworks pic.twitter.com/NG8V39gZmn