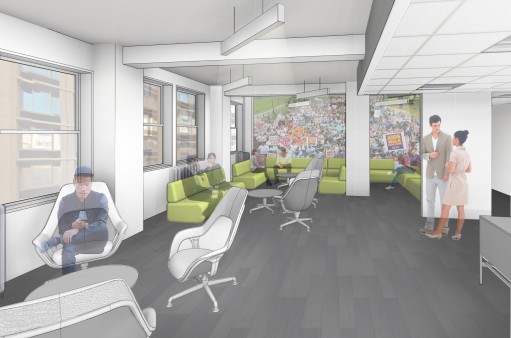 A rendering of GMHC’s future living room Courtesy of GMHC

GMHC to Move to a New Midtown Manhattan Space

The future headquarters will be more central and accessible—and located in a less expensive neighborhood.

Gay Men’s Health Crisis (GMHC) will relocate to Midtown Manhattan by the end of July, according to a press release from the HIV/AIDS organization.

The new and upgraded office spaces will help GMHC better serve its more than 12,000 annual clients. The headquarters will occupy 110,000 square feet and six floors of the building at 307 West 38th Street, just a few blocks northeast of its current 33rd Street home (the GMHC David Geffen Center for HIV Prevention and Health Education, at 224 West 29th Street, will remain where it is).

According to a “GMHC Move FAQ,” the new space is needed because its programs and services expanded in 2017 and are expected to continue growing this year. What’s more, as POZ wrote in October, GMHC has partnered with the AIDS Community Research Initiative of America (ACRIA), which focuses on long-term survivors and at-risk youth.

The Real Deal reports that GMHC is “downsizing” by moving from current 165,000-square-feet home. The paper also notes that the building in which GMHC now resides was recently overhauled, and that the neighborhood—known as the Far West Side—is undergoing massive growth (including Hudson Yards, a real estate development that includes the city’s most expensive office project). In fact, The Real Deal says that average asking rents in the Far West Side were about $119 per square foot in the fourth quarter. That compares to about $63 per square foot in the area covering GMHC’s future home. 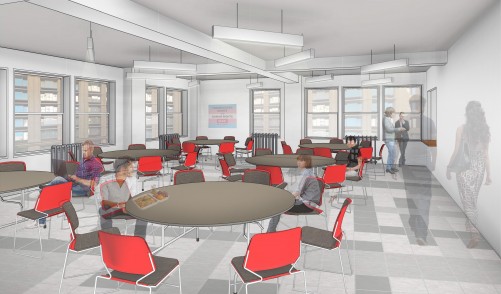 “GMHC continues to grow to serve the needs of our clients and all New Yorkers,” said GMHC CEO Kelsey Louie in the press release. “Ensuring that our space best meets the needs of our community—especially those most in need of our services, including both HIV-negative and HIV-positive people—is a top priority. We’re excited to move our headquarters to a more central, accessible location that will also better accommodate our operations and the services we offer. Our new offices will have an efficient, welcoming layout, enhancing our work toward ending the AIDS epidemic. We also want to thank our New York City Council Member and newly elected Speaker of the City Council, Corey Johnson, for helping to facilitate this move.”

The new headquarters will include many of the beloved features of the current home: the Peter Krueger Dining Room, which will serve meals to clients four days a week, the Keith Haring Food Pantry Program and the SUNY (State University of New York) client computer lab as well as mental health, addiction and counseling services. 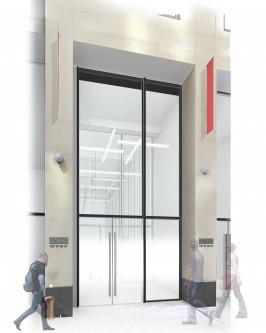