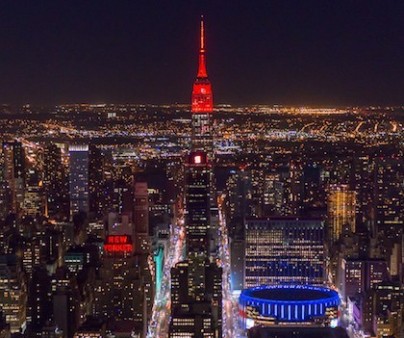 Iconic buildings of New York City are lighting up in red to raise HIV/AIDS awareness and show support for the May 17 AIDS Walk, according to a press release from Gay Men’s Health Crisis (GMHC), which organizes the walk.

The “Light Up New York” events kicked off Thursday, May 14, with a ceremony at the Empire State Building hosted by Broadway star Harvey Fierstein. Various lighting events will take place until Sunday, May 17, the date of the 30th annual AIDS Walk, held in Central Park. The walk raises funds for GMHC and 40 other tri-state area AIDS service organizations.

“May these lights, and those burning throughout the city, brighten the night sky with remembrance of the countless precious friends and family we’ve lost to AIDS,” Fierstein said in the press release. “May they carry our pledge to see the end of this disease once and for all.”

This year’s AIDS Walk arrives just weeks after New York Governor Andrew Cuomo released a blueprint to end AIDS in the Empire State by the end of the decade.