Older, Wiser, Ready for Their Close-Up

Documenting the Graying of AIDS 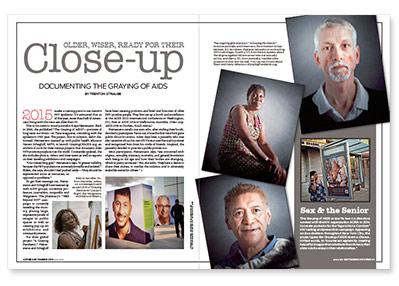 
2015 marks a turning point in our nation’s HIV epidemic: It’s estimated that as of this year, more than half of Americans living with the virus are older than 50.

This is not news to visual journalist Katja Heinemann. Back in 2006, she published “The Graying of AIDS”—portraits of long-term survivors—in Time magazine, coinciding with the epidemic’s 25th year. The project, like its subjects, didn’t die. Instead, Heinemann teamed up with public health educator Naomi Schegloff, MPH, to launch GrayingOfAIDS.org, an archive of sorts for their various projects that document older HIV-positive people across the world. Constantly updated, the site includes photos, videos and interviews as well as reports on their traveling exhibitions and campaigns.

“Our overarching goal,” Heinemann says, “is greater visibility, because the HIV population is extremely invisible and isolated.” Elders, she says, shouldn’t feel pushed aside—“they should be represented more as resources, as opposed to problems.”

To get their message out, Heinemann and Schegloff have teamed up with AIDS groups, university professors, journalists, nonprofits and Walgreens. The pharmacy’s “Well Beyond HIV” campaign is currently traveling the country, placing large, impressive panels of images in public spaces as well as creating pop-up art exhibitions and community events.

For their global project “A Graying Pandemic,” Heinemann and Schegloff have been creating portraits and brief oral histories of older HIV-positive people. They first set up a booth and installation at the AIDS 2012 international conference in Washington, DC, then at AIDS 2014 in Melbourne, Australia. (Next stop: AIDS 2016 in Durban, South Africa.)

Heinemann recalls one man who, after circling their booth, decided to participate. Turns out, it was the first time he’d gone public about his status. A few days later, a passerby who was also secretive about his own HIV status saw the man’s portrait and recognized him from his circle of friends. Inspired, the passerby decided to pose for a public portrait too.

Most participants, Heinemann says, “are concerned with stigma, sexuality, intimacy, mortality, and general frustration with being in old age and how their bodies are changing, which is pretty universal.” But, she adds, “they have a desire to share their stories, to combat the isolation and to ultimately make life easier for others.” 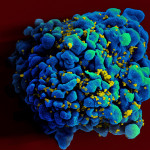