Users of Grindr, the world’s largest gay dating app, can now opt to receive reminders to get tested for HIV every three to six months.

As The New York Times reports, the news was met with enthusiasm from health officials in the HIV field. “This will ‘demedicalize’ testing and destigmatize it,” Perry Halkitis, PhD, the dean of Rutgers School of Public Health and a gay man who is living with HIV, told the Times. “The more you make it normal, the more people are going to access it.” 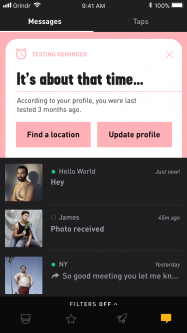 What’s more, Grindr has the potential to reach men at high risk of contracting HIV. More than 107,000 gay and bisexual men in the United States have HIV and don’t know it—and it takes an average of three years for these men to learn their status, Jonathan Mermin, MD, director of CDC’s National Center for HIV/AIDS, Viral Hepatitis, STD and TB Prevention, told the Times.

Noting that men who use location-based dating apps like Grindr are considered to be at high risk for HIV, Mermin said, “The more organizations and people involved in this [testing] effort, the better.” 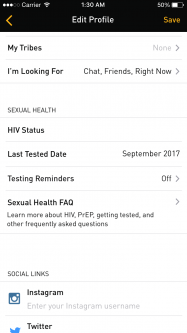 Grindr’s new feature was designed with guidance from Building Healthy Online Communities as part of Grindr for Equality’s efforts to promote sexual health and the prevention of HIV and sexually transmitted infections (STIs). The frequency of the opt-in testing reminders—every three or six months—are in line with recommendations from the Centers for Disease Control and Prevention as they pertain to some sexually active gay men.

About 3.6 million users log in to the mobile social network each day, according to a Grindr press release about the testing feature, and the app has users in every country of the world. 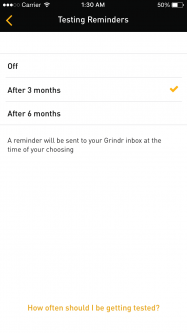