An acid produced in the mouth due to gum disease has been found to hasten disease progression in people living with HIV, Agence France-Presse (AFP) reports. The new findings will be published in the March issue of The Journal of Immunology.

According to research conducted by Japanese researchers at Tokyo-based Nihon University, periodontal disease—a condition that erodes bony structure in the gum—produces butyric acid, which blocks an enzyme that typically slows the spread of HIV in the body.

AFP reports that while previous research has found connections between gum disease and other chronic conditions, such as diabetes and heart disease, this study is the first to show that it speeds up HIV progression. The researchers plan to confirm their findings through further studies on animals. 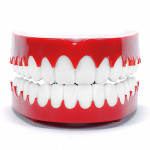 The Dentist Is IN