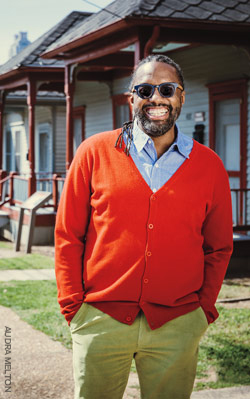 Khafre Abif is the editor of Cornbread, Fish and Collard Greens: Prayers, Poems & Affirmations for People Living with HIV/AIDS, a 616-page anthology of inspirational poetry and prose by and for people living with and affected by the virus.

The book includes works from more than 125 contributors around the world and was born out of Abif’s desire to help build and support a more multifaceted reality for people living with HIV.

“For some time, I have been struggling with the question of ‘To what community do I belong?’” says Abif, an Atlanta-based father of two, who found out he had HIV in 1991. “I think I’ve received more stigma around being bisexual than I have being positive.”

Abif didn’t come out about either his sexuality or his status until 2005, about the same time he started out as an activist. The former librarian has since blogged for The Body and appeared in several HIV documentaries, among a variety of other advocacy projects.

“For me, it is not enough to be tolerated. I need to be loved and respected,” he says.

In fact, Abif currently has five more HIV- focused anthologies in the works: for positive women (under the title Sistah’s Speak), heterosexual men (He Ain’t Heavy), young people (It Is Our Turn to Speak), transgender people (TransVoice: Shout Out Loud) and the religious community (A Pastor’s Prayer for People Living with HIV/AIDS).

A heads-up to prospective writers: Abif is calling for submissions for all five books, with publication tentatively set for 2016.

“The stories people tell have a way of taking care of them,” he says. “There are still people who are isolated living with HIV. So if those books get into their hands, there’s affirmation, there’s hope.”

Also on Abif’s roster is a cross-country HIV education mission, Cycle for Freedom. By next May, he hopes to ride his bike the length of the Underground Railroad, stopping in 14 cities to host testing rallies, film screenings and discussions about the state of HIV/AIDS.

Abif will also be publishing a memoir, titled Raising Kazembe—an homage to his son.

“My opening up has changed a lot of people,” says Abif. “I was married, I’m still having sex, I had HIV-negative children, achieved professional success, and people ask, ‘You’ve been positive for all this time?’ I hope I’m able to knock out some misperceptions and get people to look at the truth and not the myth.”

Interested in reading Cornbread, Fish and Collard Greens? Books and e-books are available from Amazon.com and AuthorHouse.com, the anthology’s indie publisher.