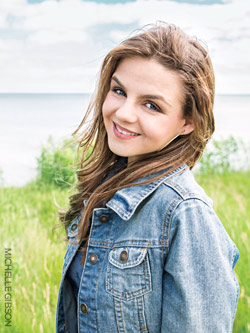 In many ways, Ashley Murphy is just a normal 17-year-old getting ready to start her senior year of high school. She talks about summer vacation, how tough math can be, and the rock band she sings in with her dad. But she’s also a sassy young HIV activist looking to change the world.

Ashley was diagnosed with AIDS in 1998 when she was just six weeks old. She was infected by her late birth mother, who was addicted to crack and alcohol. Kari and Don Murphy, Ashley’s foster parents at the time (they later adopted her), were told by doctors in Toronto that she only had a few weeks to live. Ashley clearly had other plans.

When she was 7 years old, Ashley was told by her parents that she had HIV but warned not to mention it to anybody. “I just asked, ‘Why? I didn’t do anything wrong.’” She laughs, “I started telling everybody. I’d be at school with a friend on the swings or something and I’d say it: ‘I have HIV.’”

At first, a few parents tried to exclude Ashley from sleepovers, or give her disposable plates and cups to use at dinner. Interestingly, Ashley says there was a generational divide when it came to people’s reaction to HIV. “When I told kids or my friends, they wouldn’t have a problem with it. It was mostly the adults,” she recalls.

So Ashley began her work educating others about the virus. When she was 12 years old, she did her first national TV interview. Ever since, the young advocate has been hooked.

Today she lives in Ajax, Ontario, with 10 other brothers and sisters, eight of whom have special needs such as cerebral palsy and blindness. Many of the children were taken in from foster care programs, just like Ashley. Growing up with these challenges bonded the siblings and helped give Ashley the confidence to live openly with HIV.

“The big reason I decided to speak out is due to stigma,” Ashley says. “As long as there are uninformed people out there, I still have a job to do.”

Ashley is a regular speaker at We Day, a charity initiative by Free the Children, which works to engage young people in promoting social change. She was recently asked to speak at this year’s UNAIDS conference in Geneva about mother-to-child transmission. Ashley has also given motivational speeches throughout Canada and has participated in several HIV conferences around the world. She recently finished up a TED Talk and is now working on recording her first album to raise funds and awareness for HIV/AIDS.

Ashley ends many of her speeches with the tagline: “Rock your differences, own them and be you.” She explains, “Everybody goes through some sort of life struggle that we have to carry for the rest of our lives. For me, it’s HIV. For others, it could be depression, bullying, diabetes, anything. To know that you are not alone and that you can overcome [your struggle], that’s super powerful.”
Rock on, Ashley.