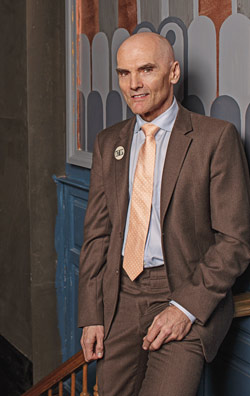 When we talk about long-term survivors, the phrase is generally applied to people living with HIV—those who have had the virus for years, and had to deal with overcoming the health issues, stigma and trauma of the early epidemic. But what about HIV-negative people? Do they have a place in the conversation?

Jim Eigo says yes. He started out as an AIDS activist at GMHC in New York City nearly three decades ago. In 1987, he was also among the first wave of activists to join ACT UP.

“We came along and said, This is not just a health care crisis—it’s a political crisis,” says Eigo, who is by nature a soft-spoken introvert, and by practice an outspoken writer with a knack for decoding the complexities of treatment access.
Eigo’s first role in the group was to help write the first ACT UP case on AIDS research and regulation, one of the earliest documents to point out the problems and delays with clinical trials.

When asked whether he considers himself a long-term survivor of HIV, Eigo says, “Yes. I think we have to. In those early days, we had no way of knowing our status. Anyone who had to deal with what we did went through some sort of trauma, regardless of their status.”

Eigo also notes that in ACT UP’s early days, the core treatment activism group was made up of all HIV-negative people. Most were women. And Eigo, like many others, gave back to HIV research in his own way, participating in prevention-focused clinical trials throughout the ’80s and ’90s. It’s a side of early AIDS activism that is often forgotten.

In 1992, Eigo broke ties with ACT UP, refusing to pick sides in the organization’s split. But he remained in the fight, co-founding two HIV prevention groups, the AIDS Prevention Action League (APAL) and Sex Panic. He also edited two gay sex magazines, PlayGuy and Inches, into the new millennium.

In December 2012, the U.S. Centers for Disease Control and Prevention released new figures that HIV rates were spiking among gay men.

Eigo was called back into action. “I went back to ACT UP the next month,” he laughs.

Since then, Eigo helped write the Atlanta Principles, ACT UP’s new national prevention agenda. He has also taken a big role in “yelling at the department of health” to roll out New York State’s new blueprint to end the AIDS epidemic by 2020.

“In some ways, it’s like at the beginning of the epidemic again, back when a lot of us didn’t know our status and it didn’t matter,” Eigo says. “We now have things like treatment, PrEP [pre-exposure prophylaxis] and health care reform. [Today,] people who are HIV negative and people who are HIV positive are essentially in the same boat.”

The only difference this time, says Eigo, is that he thinks this new phase of HIV treatment and prevention and the re-invention of “safer sex” may actually get us to the end of the epidemic.