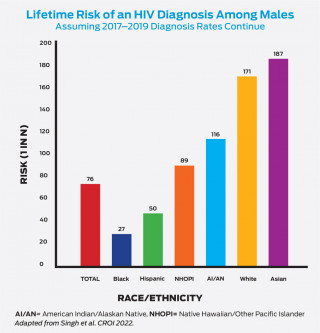 Who Has the Highest Lifetime HIV Risk?

“To end the HIV epidemic, we need to provide equitable access to people who could most benefit.”

When it comes to who has the highest lifetime risk of acquiring HIV, that dubious honor goes to Black Americans, with Latinos not far behind, according to research presented at the annual Conference on Retroviruses and Opportunistic Infections.

Sonia Singh, PhD, and colleagues from the Centers for Disease Control and Prevention combined data on new HIV diagnoses and non-HIV-related deaths with census data from the United States to create a map of where—and for whom—HIV rates are highest.

The researchers projected that 1 in 76 men could be diagnosed with HIV over the course of their lifetime, but this varied greatly across groups: 1 in 27 Black men and 1 in 50 Latino men could be expected to ever acquire HIV, compared with 1 in 171 white men and 1 in 187 Asian men. While 1 in 309 women overall are projected to ever be diagnosed with HIV, this rose to 1 in 75 Black women and 1 in 287 Latina women, compared with 1 in 874 white women and 1 in 1,298 Asian women. By geography, 9 out of the 10 areas with the highest HIV risk were in the South.

Given all this, it’s hard to believe that the overall lifetime risk of acquiring HIV has actually decreased since the last time this analysis was conducted, in 2014—a drop of 11%.

“Every person who could benefit needs to have access to the highly effective prevention tools that are available,” Singh says. “To end the HIV epidemic, we need to provide equitable access to people who could most benefit.”