ONE’s Tony Valenzuela recently led the LA-based Foundation for the AIDS Monument. In 1999, he caused a stir on the cover of POZ.

Longtime HIV and LGBTQ advocate Tony Valenzuela is the new executive director of the Los Angeles–based ONE Archives Foundation. The nation’s longest-running LGBTQ organization, ONE preserves and shares LGBTQ history and culture, including elements about HIV and AIDS (such as the GMHC safe-sex poster at the end of this article). Valenzuela was named the new leader in September and succeeds Jennifer C. Gregg, according to a statement from ONE Archives Foundation. 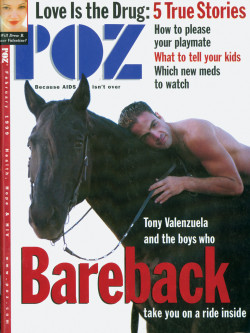 The February 1999 cover of POZ

Valenzuela is no stranger to history and activism. POZ profiled him in February 1999, featuring him nude on a horse for the cover story, “They Shoot Barebackers, Don’t They?” A few years earlier—long before the advent of pre-exposure prophylaxis (PrEP) and Undetectable Equals Untransmittable (U=U)—Valenzuela had raised the ire of many in the HIV community. Not only did he acknowledge in public that he, an HIV-positive man, enjoyed condomless sex, but he also insisted that sex without condoms was deeply meaningful and important and that HIV prevention and public health efforts should not pathologize people who felt that way.

Of Valenzuela’s new role, Chiedu Egbuniwe, the board chair of ONE Archives Foundation, said “Tony is admired and loved by the LGBTQ+ nonprofit community. With unparalleled leadership experience, strong relationships and boundless enthusiasm, Tony is the ideal leader for the organization. We are excited to work with him in our mission to keep queer history visible and to advance our vision of a safe future for all LGBTQ+ people.”

“This November, we celebrate the [ONE Archives] Foundation’s 70th anniversary,” Valenzuela notes in a video message posted by ONE (you can watch the video in the post above or on Vimeo here). “That’s 70 years dedicated to telling the stories of LGBTQ life. How does knowing our history help guide us forward today? I know, for me, learning about the struggles that my queer and Latinx ancestors have overcome helps me to understand that the bigotries that we face today are not new. It also helps me see that the road map to combat them has already been forged by past activists, rabble-rousers and regular folks, all determined to make our lives better.”

Valenzuela is the first Latino person to helm the ONE Archives Foundation, which was founded in 1952 and continues to organize exhibitions and teach students and researchers about LGBTQ issues. The nonprofit also provides a variety of programming to the public, both in person and digitally, like in the Instagram posts below:

This article was updated to better reflect Valenzuela’s HIV advocacy in the 1990s.