The “non-corporate, grassroots” march in NYC will be held the same day as the traditional Pride march.

Prominent HIV activists and organizations are among the more than 50 groups endorsing the Stonewall 50 March for Human Rights and Social Justice, an alternative to the traditional Pride March. Both will take place in Manhattan on Sunday, June 30.

Spearheaded by the Reclaim Pride Coalition (RPC), the Stonewall 50 March promises to be a “truly grassroots action that mobilizes the community to address the many social and political battles that continue to be fought locally, national and globally,” according to an RPC press release about the endorsements. The march will offer a counterpoint to the “corporate-saturated, highly policed nature of recent parades…as well as onerous metal barricades and size limits on marching community groups.” 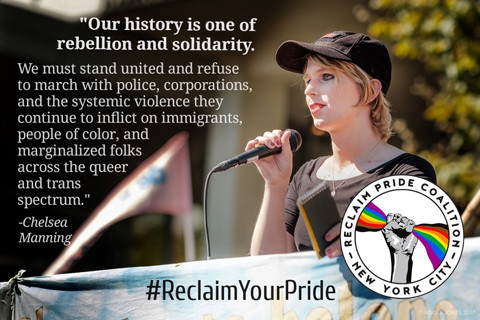 Promotional material for the Stonewall 50 MarchCourtesy of Reclaim Pride Coalition

According to its press release, RPC is a growing international alliance of more than 50 LGBTQIATS+ and hundreds of individuals (the letters stand for lesbian, gay, bisexual, transgender, queer, intersex, asexual and two-spirit).

“The current Pride Parade is shameful—a corporate extravaganza that completely ignores the profound fights we’re still waging all over the world,” said Larry Kramer, iconic AIDS activist and author of The Normal Heart, in the press release. “We must send a powerful message to the homophobic, racist Trump administration and regimes and corporations everywhere that are killing our brothers and sisters.”

Prominent HIV activists Eric Sawyer, Ann Northrop and Peter Staley—the latter who was profiled in the documentary How to Survive a Plague—also support the Stonewall 50 March. HIV-related groups that signed on include Health GAP and Housing Works and HIV-adjacent groups like Immigration Equality and Gays Against Guns.

Manhattan’s annual Pride March is held the last Sunday in June. This year will mark the 50th anniversary of the Stonewall riots, viewed by many as the genesis of the modern LGBTQIATS+ movement. 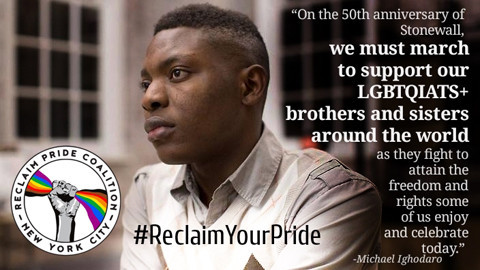 Promotional material for the Stonewall 50 MarchCourtesy of Reclaim Pride Coalition

This past year, RPC met with Heritage of Pride (HOP), which organizes the annual Pride March and related events, to express its concerns about issues such as corporate saturation and strong police presence.

The meetings did not make any headway, so RPC has committed to this alternative march to be held the same day. The Stonewall 50 March will start at the Stonewall Inn in Greenwich Village and proceed north along Sixth Avenue to Central Park. This is the same route of the original Christopher Street Liberation Day March in 1970. By contrast, the Pride March usually travels along Fifth Avenue.

>In order to save on police overtime pay, the NYPD wants all parades to be under 5 hours. Last year’s parade allowed the NYPD to dictate the Parade route. In 2018, the Parade started at 17th St. and 7th Ave. and ended at 29th St. and 5th Ave. – a march from nowhere to nowhere. The location of the Pride Festival was also moved from near Christopher Street (historically the center of gay life in NYC) to University Place. Both decisions were made with similar plans for 2019 in mind, and both have been widely criticized by Pride participants. #reclaimpride #reclaimyourpride . ???? by Mel Evans/AP

On its website, ReclaimPrideNYC.org, RPC describes its vision for the Stonewall 50 March as:

For related news, click on the hashtags below and don’t miss the POZ cover story about Gay Against Guns, titled “Don’t Shoot the Messenger.” Also, you can read Peter Staley’s POZ blog here.