Condomless Sex? Maybe Not Yet

Earlier this year, Swiss researchers issued a statement suggesting that HIV-positive people on meds, with undetectable viral loads for at least six months and no other sexually transmitted infections (STIs), were virtually sexually non-infectious—even if they didn’t use condoms.

The announcement provoked much discussion about whether condomless sex could be safe between serodiscordant couples. UNAIDS and the World Health Organization said, “No.” Activists and people living with HIV called for continued investigation.

These findings suggest that people who are sexually active with a partner of a different serostatus may want to think twice before ditching the latex.


French researchers and other scientists have listed some possible reasons for fluctuations in semen viral loads: a symptomless STI or inflammation of the prostate or urethra may boost seminal viral load; meds may fail to penetrate seminal fluids; or positive people may miss then restart HIV meds, which may lead to variations of viral loads.

So, for now, researchers are not green-lighting condomless sex for guys with undetectable HIV blood levels. And for serodiscordant heterosexual couples (in which the man is positive, the woman negative) who want to conceive, the researchers advise that the safest method remains artificial insemination. 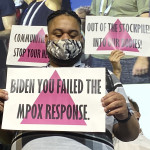