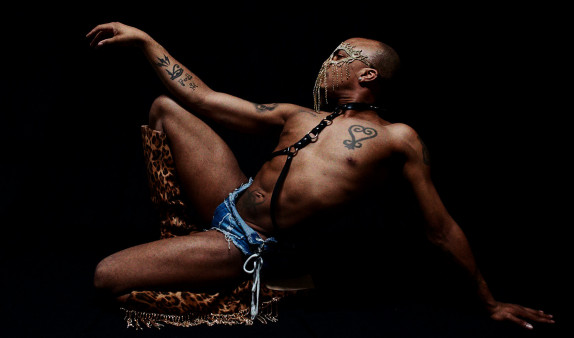 Advocates wear a lot of hats. This one has a lot of names. As the new president of HIV nonprofit Impulse Group New York City, he’s Dey Armbrister. As a pole dancer with poetic swag, he’s Dey Phoenix. And as a friendly face in the “HIV Stops With Me” public service campaign, he’s simply Dey. (And in case you’re curious, Dey is short for DéShaun.) 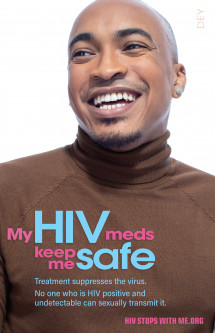 Dey Armbrister appears in the “HIV Stops With Me” campaign across New York state.HIVStopsWithMe.org

The multifaceted 31-year-old wasn’t always such an outgoing champion of sexual health, especially during the challenging period in college following his HIV diagnosis. But, as he tells POZ, he took his problems to the dance floor, and an activist was born. He also discusses Impulse Group NYC and its latest fundraising project, a gorgeous art book titled Our Light Through Darkness that highlights queer Black and brown communities and that Dey describes as “a visual manifesto to our resistance.”

Tell us about Impulse Group NYC.

Impulse Group is a nonprofit volunteer organization funded by AHF [AIDS Healthcare Foundation]. Basically, the group engages, supports and builds community within the queer community. There are 25 chapters globally and 11 spread throughout the U.S. It was founded by Jose Ramos, the history goes, with seven friends in a kitchen having conversations about all types of things and then wanting to bring that connection to the community. NYC is one of the 25 chapters. We’ve been active for six years. Our chapter most recently has touched base more with the African-American community, and Latinos to a degree. But at its core, we are for the whole spectrum of our gay community. It doesn’t matter what color or creed, we’re here to represent all diversity.

We basically put on a number of different events, from panel discussions and fundraisers to aromatherapy and massage therapy [events] to promote self-care. The first event I attended was a Fire Island pool party in 2016. Then I volunteered in 2019 for an event called Party for a Purpose, to raise money for two local nonprofits. Then I interviewed with the board of directors and became the director of advocacy. I would identify what topics were pertinent to discuss, and then we would “Impulsify” them and bring them to the community through events. We touch on a variety of topics from sexual health and HIV to body positivity and mental health.

One event we consistently do is a T7 dinner, short for Table for Seven, which goes back to the original seven members of Impulse. That event stays consistent, at least in NYC. We invite community members to a dinner-type setting—but because of COVID, that changed. We had a virtual brunch and provided Seamless gift cards and had breakout sessions for topics.

And I just got elected as president of Impulse Group NYC for 2021–2022. We have a new board, and we’ll be planning events throughout the year. We know we want to touch on substance abuse and mental health this year.

The group just published an art book, Our Light Through Darkness, with photos, illustrations, paintings, essays and poems. How did that fundraising effort come about?

For 2020, we couldn’t engage people in person for our Party for a Purpose. Our vice president, DeMarkis Bonner, came up with idea of doing a coffee-table book for our queer community, almost like a scrapbook telling a family history. And we always wanted to work with LaQuann Dawson—he’s a photographer, among other things; he’s astounding—and this was the perfect opportunity to tap into his talented lens. Not only did he shoot images, but he also brought visibility to other artists in our queer community, so there are other photographers and writers and illustrators.

The goal is to raise $10,000. All the proceeds go to [HIV nonprofits] Destination Tomorrow and GLITS, which stands for Gay and Lesbians in a Transgender Society. Anyone interested in purchasing it, go to OurLightThroughDarkness.com. [Editor’s note: To read more about the book in POZ, see “A Visual Manifesto for the Queer Black Community.”]

Is there a theme to the book?

Throughout 2020, we put on a theme of “transparency”—this is Impulse Group NYC—what this meant for us is encouraging our community to own our truths and identities and unique qualities, including kinks and fetishes and gender expression that might be taboo. We talked about body positivity and being bold. Those are things we wanted to bring visibility to. It really did start off as a book where we wanted to own eroticism and kink. What would that look like, if we took pride in that instead of shunning it? And due to racial injustices, we wanted to speak on being revolutionaries. It was very pertinent to highlight Black and brown queer and trans people—and HIV—and even those who might have disabilities. I describe the book as a visual manifesto to our resistance.

The book is unapologetically sexual. Is that even more taboo in the Black community?

Absolutely—especially if you’re religious. But sex is also something for pleasure, and sex is also healthy. It’s important for us Black and brown people to own that for ourselves. I find that our white counterparts can have more freedom. You’ll see a lot of leather daddies and things of that nature unapologetically waving their freak flag. But when it comes to Black and brown folks, you can definitely still find a lot of social stigmas within our communities. We mostly hide ourselves or are more DL because we worry about what other people think. In this book, we’re going to own our journey and road map unapologetically.

You’re featured in the book, including an HIV-related poem by Dey Phoenix that relates part of your HIV journey.

I did write the foreword [as Dey Armbrister]. And, funny enough, I did write a poem called “Black Phoenix Dance.” Dey Phoenix is my creative moniker. For me, Phoenix is about reincarnation and rebirth. Not just from HIV, but also my mom and I were burned out of an apartment in Brooklyn. So no matter what hardship I go through, I can come out a better person from the ashes. 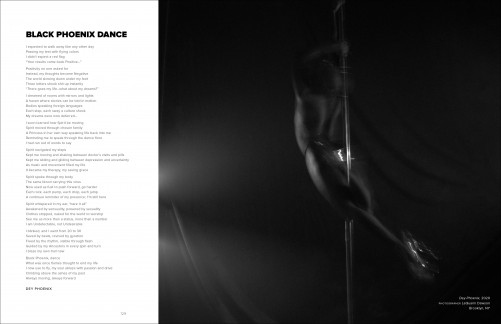 Eleven years ago, I was diagnosed with HIV. I was just about to turn 20. I was in a relationship when a [former boyfriend tested HIV positive], and he did the due diligence to bring it to my attention. It wasn’t anything malicious. But it shook my world up. I was a broke college student, and things were looking bleak. But I linked myself through the HEAT [Health & Education Alternatives for Teens] program based out of Brooklyn—they help young adults deal with a number of issues, like HIV. I’ll never forget my doctor. He put me on the right track, getting me case management and medication right away, which in turn helped me come out about my HIV status with my mom. After she knew, everything else slowly opened up. Because my mom is like my world. Once she knew, it didn’t really matter who knew.

What aspect did pole dancing play in your journey?

Basically, I had dreams and aspirations of dancing and owning a dance studio. I started out in college with hip hop and street jazz. [While I was struggling with my HIV diagnosis], a friend nicknamed Princess told me to take everything out on the dance floor. Verbally, I didn’t know the words to say or how to approach certain people when it came to my status, but I was able to always dance. That was a time that dance really did save my life. 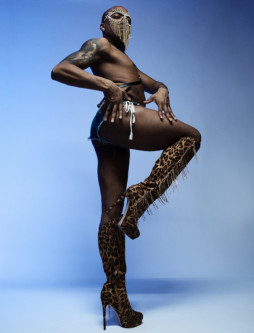 Fast-forward to pole dancing. That reinvigorated my life even more, because I found a certain amount of freedom within expressing my sexuality and owning my sensuality. In all honesty, I started pole dancing because I had a very high regard for strippers, and I always wanted to low-key be one myself. That’s legit why I started it. I’ve been very transparent about my journey as a stripper. I have worked strip clubs briefly, and then during the COVID pandemic, there’s been virtual strip club experiences via Zoom.

In turn, that has made me a strong advocate for sex workers rights too. When we talk about sex work, there’s a whole spectrum. It could be strippers where you might not physically be having sex, but you’re exchanging the fantasy or emotional labor of it versus those who might do full-service sex work. So I do fall into that spectrum, and I have owned it. We’re in a society where we can consume so much porn and sex and violence and XYZ, yet we’re expected to hide our true desires. My thought process on this is, if it’s consensual, then why not celebrate it? Why not celebrate the bodies that we’re in? If someone chooses to get naked for the intent, why can’t they get equity and get paid?

Also, if you know strippers, you’ll know them to be advocates, to be strong people who speak for their community and who look out for one another. All of those things, when it comes to my HIV journey, they have really helped me cope and mend and be a strong person and an advocate too.

You’re one of the faces of New York State’s “HIV Stops With Me” campaign, which includes posters, videos and social media efforts.

This is my third year on the “HIV Stops With Me” campaign. I’ve been undetectable for years. When we found scientifically that [people with an undetectable viral load] cannot transmit to our partners—[a fact referred to as Undetectable Equals Untransmittable, or U=U]—it gave us more options of how to navigate our sexual encounters. That’s not to say it’s an open door to do anything you want, but it did open doors. In the campaign, we’re telling our stories. It’s similar to Impulse Group. We’re connecting and engaging the community to support one another, to get resources we need and to just be better.

To read about a 2018 video campaign from Impulse Group NYC, see “What Comes After the Hunt? This Safer-Sex PSA Unwraps an Idea” and “‘Sex and the City’ Spoof Promotes Safer-Sex Choices.” And to read about Impulse Group’s South Florida chapter, check out “Impulse Control.”