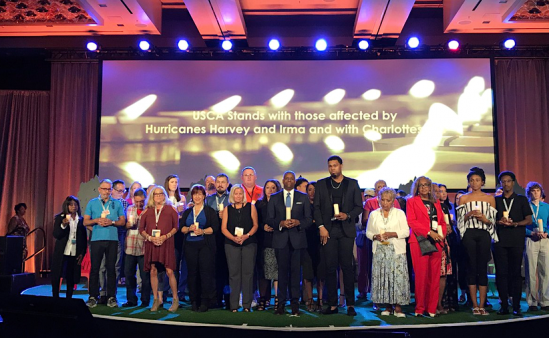 Once again, the HIV community is coming together to take care of its own. Pharmaceutical giant Gilead Sciences donated $1 million to a fund to help HIV organizations affected by hurricanes Harvey and Irma. Grants will be coordinated by AIDS United and the National Minority AIDS Council (NMAC). In addition, AIDS United allocated $150,000 from its Southern HIV Impact Fund to the efforts.

The Gilead contribution was announced Thursday, September 7, during the opening plenary session of the United States Conference on AIDS (USCA), held this year in Washington, DC, and sponsored by NMAC. During the announcement, delegates from hurricane-struck regions who were being honored for their work appeared onstage.

“USCA stands with those affected by hurricanes Harvey and Irma and with Charlottesville,” read a message projected those on stage as Frenchie Davis sang “Home” from The Wiz.

$1 million in funding from Gilead to help HIV organizations and patients impacted by Irma and Harvey announced at #2017USCA. pic.twitter.com/94ynXTr92Q

According to an NMAC press release, the rapid response arm of AIDS United’s new Southern HIV Impact Fund will administer the relief funds, and NMAC will appoint an advisory panel to help with the grantmaking.

You can find an application for hurricane relief on AIDSUnited.org.

“Gilead’s generous contribution will make a tremendous difference for people living with HIV and for organizations serving them that were ravaged by hurricanes Harvey and Irma,” said NMAC executive director Paul Kawata in the press release. “We must make sure that we reach the organizations most in need as rapidly as possible.”

According to a Broadway Cares press release, the fundraising organization’s grants will go to 17 social services organizations in Houston and across Texas and the Gulf Coast.

“These emergency grants will reach local organizations that might be overlooked by government and other hurricane relief initiatives and for whom our unrestricted grants can be put to work immediately on the ground,” Broadway Cares/Equity Fights AIDS executive director Tom Viola said in the press release. “The Broadway community reaches far beyond the few blocks of New York City’s theater district and, once again, this community offers help to those desperate for refuge from the storm and with few places to turn.”

Among the grantees, The Actors Fund will receive $50,000 to provide financial assistance to those working in the arts and entertainment and affected by Hurricane Harvey. (The online press release includes a message from actor Michael Urie, who was born in Houston.)

In addition, nine food banks will provide assistance, as will The Hobby Center for the Performing Arts in Houston, which was damaged by the storm. 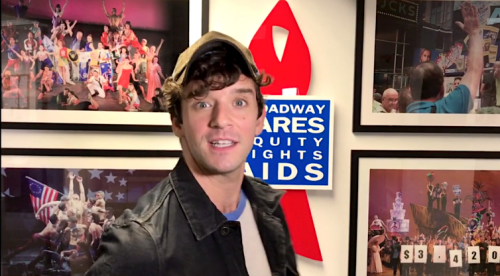 Meanwhile, The Campbell Foundation, a Florida-based nonprofit that supports HIV clinical research, donated $10,000 to AIDS Foundation Houston and another $10,000 to Montrose Center, which serves the LGBT and HIV communities. According to a Campbell Foundation press release, the emergency funds are to be used as the groups see fit.

Before Hurricane Harvey, AIDS Foundation Houston was serving more than 200 people living with HIV and residing in six housing programs. It was forced to shut its doors because of the hurricane, and now it’s dealing with displaced clients and people who may have run out of medication, according to the foundation’s chief development officer, Melody Patelis.

Similarly, the Montrose Center has more than 35,000 clients in its LGBT programming and 2,422 clients living with HIV. Many of the clients and staff have lost everything, Alexandria Mackzum, community project specialist, tells the Campbell Foundation. But thanks to the grant, “Montrose Center case managers will be able to coordinate support for people living with HIV, ensuring that these clients have access to medication, housing, furniture and nonperishable food. HIV-positive client needs will be assessed on an ongoing basis during the city of Houston’s recovery from this catastrophic natural disaster.”

“Living in South Florida, we know firsthand the devastation a hurricane can bring,” noted Campbell Foundation executive director Ken Rapkin. “Many of the most vulnerable people—those living with HIV/AIDS—have had their lives turned upside down and we wanted to do what we could to assist.”

Finally, here’s one more image from the USCA announcement, this one with singer Frenchie Davis: