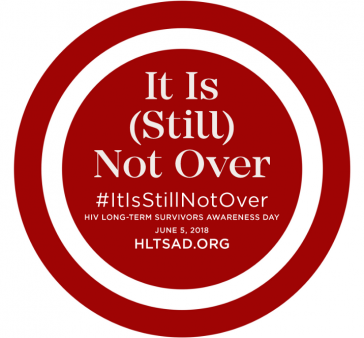 #ItIsStillNotOver. Plus: These survivors have a message for you! [VIDEO]

Tuesday, June 5, marks the fifth annual HIV Long-Term Survivors Awareness Day (HLTSAD) 2018. This year’s theme is “It Is (Still) Not Over.”

The awareness day “is about celebrating our survival and looking forward to envisioning and [creating] the lives we never imagined we’d live,” according to HLTSAD.org.

Launched by Tez Anderson and Let’s Kick ASS—AIDS Survivor Syndrome—the campaign coincides with the 37th anniversary of the beginning of the AIDS epidemic. Specifically, it was June 5, 1981, when the first report of what became known as HIV/AIDS was printed in Morbidity and Mortality Weekly Report, a publication of the Centers for Disease Control and Prevention.

This year’s theme plays off the prominence of the “ending AIDS” and “getting to zero” campaigns launched by health departments and cities across the nation and globe. “Before we end AIDS, let’s take care of the needs and issues of long-term survivors, people who have lived with HIV for 25- and 35-plus years,” said Anderson in an HLTSAD press release. “Our lives were dramatically changed by the epidemic, and it feels like the community has moved on. The meme ‘we lost an entire generation to AIDS’ is wrong. We lost much of a generation, but there are many of us still here, surviving against the odds.”

In related news, The Reunion Project has just released a video of long-term survivors discussing their legacies. Watch the video above and read more about it in Mark S. King’s blog post here.

In addition to the videos, the Reunion Project released a report and call to action. For more, read “We We Need to Create a National Coalition of Long-Term HIV Survivors.”

Similarly, a coalition named HIV: The Long View has released two videos titled Never Alone in which long-term survivors talk about the challenges they face and the support they find from community networks. The coalition also published a report identifying five trends that will transform health care in the next 20 years. For more on the report and videos, click here.

And for a look at the long-term impact of AIDS activism, read the POZ article “How Are Early Members of ACT UP Adjusting Today?”