Source: The Local Burden of Disease project at the The Institute for Health Metrics and Evaluation

HIV Prevalence Varies Dramatically Between and Within African Nations

Looking only at national prevalence masks hot spots where resources to combat the epidemic are most needed.

The proportion of the population living with HIV in sub-Saharan Africa, also known as prevalence of the virus, is widely variable not only between nations but also within nations. That is according to a highly granular new analysis of HIV prevalence in this hard-hit region.

Publishing their findings in the journal Nature, researchers behind the Local Burden of Disease project at the Institute for Health Metrics and Evaluation at the University of Washington in Seattle developed estimates for the proportion of the population 15 to 49 years old living with HIV in 2017. They broke down their estimates by 5-square-kilometer divisions across all sub-Saharan African nations. They also compared current HIV prevalence estimates with those spanning 2000 to 2017.

“Changing the trajectory of HIV/AIDS in Africa requires that we continue to seek better ways to know the epidemic,”John Nkengasong, PhD, director of the Africa Centers for Disease Control and Prevention, said in a press release. “This paper will support policymakers and health care providers in locating hot spots of HIV/AIDS at national and subnational levels and will help guide smart investment of scarce resources for diagnosis, prevention and treatment.”

Between 2000 and 2017, the number of those 15 to 49 years old living with HIV in sub-Saharan Africa increased by 3 million due to a high rate of new infections as well as increased life expectancy for those living with the virus thanks to the expansion of antiretroviral treatment. However, during this period, prevalence of the virus actually declined because the overall population grew at a faster rate.

Meanwhile, global funding for combating the virus has dropped since 2013. 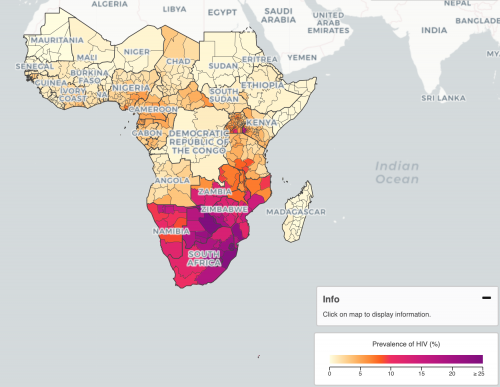 Source: The Local Burden of Disease project at the The Institute for Health Metrics and Evaluation

Breaking down HIV prevalence by nations’ second-level administrative subdivisions, such as districts or departments, the study authors found that in 36 of the 47 nations analyzed, there was a more than twofold disparity in HIV prevalence between a nation’s subdivisions. 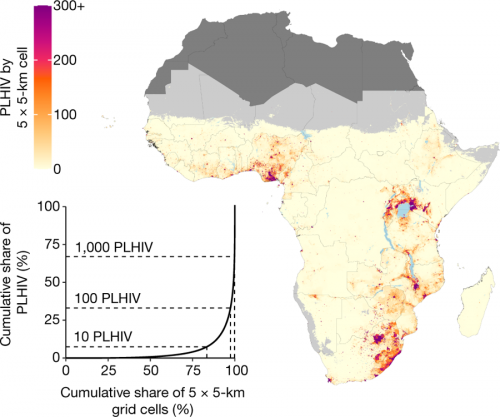 The prevalence of HIV per 5km by 5km square areaSource: The Local Burden of Disease project at the The Institute for Health Metrics and Evaluation

On a national level, countries in southern sub-Saharan Africa have a dramatically higher HIV prevalence than those to the north. However, looking at the 5-square-kilometer areas reveals parts of Kenya, Malawi, Uganda and Tanzania in which more than 10% of the local population is living with the virus.

Between 2000 and 2017 the rate of change of HIV prevalence, including whether it

increased or decreased, varied both between and within sub-Saharan African nations. 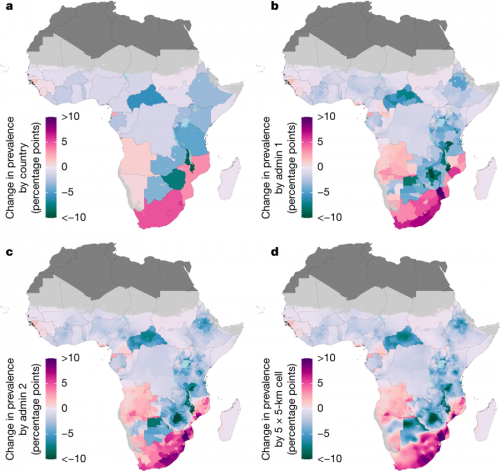 To read the press release about the study and to interact with the data visualization tools, click here.