Detail from the cover of the “No Data No More” manifesto Courtesy of AVAC.org

The “No Data No More” manifesto explains why it’s vital to include more transgender people in HIV prevention research. [VIDEO]

Transgender women experience higher rates of HIV than most other populations. Globally, it’s estimated that 19% of trans women are living with HIV, 49 times the general population; conversely, not much is known about HIV among transgender men and nonbinary people. Given these facts, why aren’t more transgender and gender-diverse (TGD) people included in HIV-related research and prevention efforts?

The “No Data No More” manifesto spells out the barriers and biases underlying such shortcomings as well as the factors that drive higher HIV rates among TGD people. What’s more, the manifesto provides a road map for ensuring the participation of TGD people in HIV prevention and research.

“For trans-focused programs to be effective, trans people need to be in the leadership seat.” Immaculate Nyawira Mugo, South Africa.
Read No Data No More, a manifesto for the #HIVprevention research priorities of trans and gender-diverse people.https://t.co/v6feRQQ3uz #IAS2021 pic.twitter.com/CA4YkyqJXv

Written by members of the global TGD activist community with support from AVAC, an organization that focuses on global support for HIV prevention, “No Data No More: Manifesto to Align HIV Prevention Research with Trans and Gender Diverse Realities” was released July 19 to coincide with the 11th International AIDS Society’s Conference on HIV Science (IAS 2021), notably the symposium “What Is Missing in the HIV Response?: Strengthening HIV Programmes for Trans Populations in the Global South.” The authors held a virtual press conference the same day. You can watch it below:

Noting that TGD people often face stigma, criminalization, violence and marginalization while being underrepresented and overlooked in HIV research, the manifesto offers three main recommendations to advance research among this population. An AVAC press release highlights them:

The manifesto notes that gender-affirming hormone therapy “is a building block of TGD health and well-being, including HIV prevention” and that research on the interactions of hormone therapy with HIV meds—whether used for treatment or prevention—is sorely lacking. The authors call for research and clinical trials to resolve these unknowns. 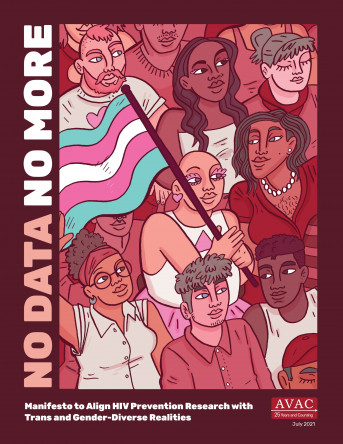 Cover of the “No Data No More” manifestoCourtesy of AVAC.org

In addition, a section of the manifesto’s summary details additional goals:

While there are growing commitments to TGD-inclusion, this goodwill doesn’t stretch far enough to ensure needed research is adequately funded or developed in partnership with TGD communities and answers critical questions. As such, we envision an HIV research agenda to overcome this historic disparity that:

"As a transmasculine person who has sex with cis men...my identity...is...consistently overlooked by the #HIV establishment" Max Appenroth, Cologne. But that can change! Go to https://t.co/v6feRQQ3uz, for the research priorities of trans and gender diverse people. #IAS2021 pic.twitter.com/K0dpRerjcN

“No Data No More” was coauthored by:

According to the Centers for Disease Control and Prevention, 2,351 transgender people in the United States were diagnosed with HIV from 2009 to 2014, a number that doesn’t include those living with HIV who are unaware of their status. It’s estimated that about 1 million Americans identify as transgender.

For more related data, visit section of the POZ Basics on HIV titled “HIV and Transgender People,” which also explores how HIV affects trans people differently. And to read inspiring profiles of HIV activists from the TGD community, check out the 2019 POZ 100: Celebrating Transgender, Gender-Nonconforming and Nonbinary Advocates.