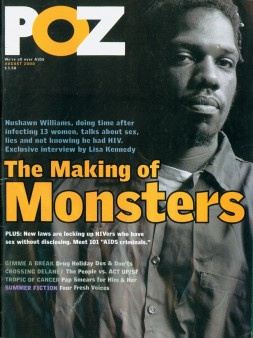 HIV-positive convict Nushawn Williams has served his sentence, but he lost his appeal to be released from civil confinement, reports the Buffalo News.

In 1997, Williams became the national face of criminal HIV transmission. As POZ reported in its August 2000 cover story, “The Miseducation of Nushawn Williams,” out of 28 of his known sexual partners in Chautauqua County, New York, 13 women tested positive, several after Williams was told he was living with the virus. In the ensuing trial, Williams was convicted. He has since served his 12-year sentence but has not been released from confinement.

According to the Buffalo News, under the Sex Offender Management and Treatment Act, adult sexual offenders deemed likely to commit sex crimes again can be held in a treatment facility.

In 2010, Williams was placed in civil confinement after a State Supreme Court panel agreed he suffered a “mental abnormality” and was dangerous to the public. His challenge to the confinement in 2013 was denied, and last week the appellate judges affirmed the denial.

Williams, now 38 and going by the name Shyteek Johnson, has no release date and could be held indefinitely.

For more about this case, read the 1998 Harper’s Magazine article “The Secret Sharer: Sex, Race and Denial in an American Small Town,” by JoAnn Wypijewski (the entire issue costs $6.99 to download). Advocates fighting HIV criminalization continue to praise the article for its nuanced understanding of the complicated issue.

National Survey to Assess Attitudes on HIV Criminalization Among PLHIV