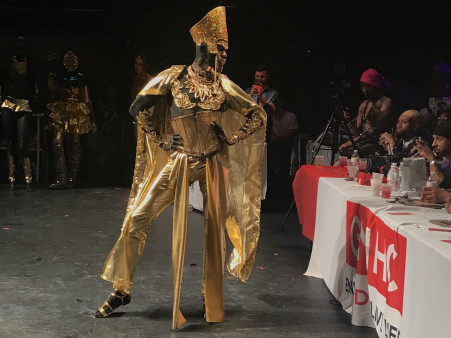 The kingdom-themed event played host to the stars and creator of the FX series Pose as well as to a menagerie of voguing creatures.

The Kingdom of Africa–themed 28th annual Latex Ball attracted a host of colorful and extravagantly dressed queens, kings and creatures as well as Pose showrunner Ryan Murphy and several members of the cast of the new series about the vogueing and ballroom scene in New York in the late 1980s.

“Tonight is the night that the many Kingdoms of Africa will let down their magical force field to make one with those who once shunned us,” proclaimed the event announcement. “This will be an attempt to unite all the peoples of the world as one and the Gondwana Kingdom will once again rise to the top and unite us at this special celebration of the world.”

Predominantly made up of “Black and Latinx lesbian, gay, bisexual, and transgender (LGBT) individuals,” the community is built around an organizational structure of houses that function like families and include a house mother or father. Houses then compete in balls.

Held June 30 at Terminal 5, a music venue in New York City’s Hell’s Kitchen neighborhood, the event was free to the public and ran from 6 p.m. to beyond two in the morning. Attendees competed on the runway in a variety of categories, including “The Secret Pyramids Runway,” “Reveal of the Royals Fashion” and “Dancing Creatures Voguing” for both cash prizes and trophies.

As the night unfolded, gold-clad Egyptian gods and whirling furry wildlife inspired by the fauna of Africa worked the runway, popping and dipping and posing for the judges’ table to the thrumming beat of the music and the rapid-fire riffing of the evening’s emcees. Those competing in the “Bizarre” category stole the show, their shimmering, opulent costumes dazzling onlookers.

Free HIV testing—along with other health services and materials—was also available throughout the night.

“The House and Ball community lost many members to AIDS at the onset of the epidemic in the 1980s. As a result, in 1989, GMHC and leaders from the ballroom community created the House of Latex Project,” the release stated. “GMHC continues to produce the Latex Ball and, throughout the year, reaches this population at other balls and LGBT youth venues, as well as through social media, through innovative approaches to HIV prevention and safer-sex messaging.”

Celebrities such as Magic Johnson’s son EJ, performer Kevin Aviance and Pose stars Mj Rodriguez, Dominique Jackson and Ryan Jamaal Swain could be spotted in the large crowd (and at times onstage), while Pose creator Ryan Murphy posed (get it?) for the camera with trans activist Janet Mock, a producer, director and writer on the show, before receiving a community award.

“For close to 30 years, the Latex Ball has played a critical role as a public health intervention. It also provides a strong sense of community for young Black and Latino youth and adults,” said Kelsey Louie, the CEO of GMHC, in the release. “The ball highlights the creativity, resiliency, and strength of the House and Ball community, as well as encourages members to support their community’s health.”

Click on the slideshow to view more pics and check out the action in the Instagram posts below:

my favorite moment from the #latexball