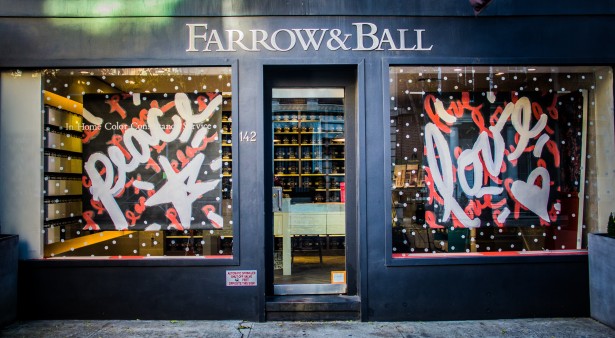 Windows By Design 2017, in the Upper East Side of New York City Courtesy of DIFFA/JCDZ Photography

Can you guess the inspirations behind these DIFFA and Farrow & Ball collaborations?

Holiday charity and creativity are on colorful display across the country thanks to Windows By Design, an initiative to raise HIV awareness and funds through a collaboration with DIFFA: Design Industries Foundation Fighting AIDS and paint and paper specialist Farrow & Ball.

Specifically, local designers created displays in 16 Farrow & Ball showrooms using the company’s paints and wall coverings. For every image posted on Instagram with the hashtag #FaBforDIFFA, Farrow & Ball will donate $1 to DIFFA, which awards grants to a diverse selection of community and national nonprofits fighting the HIV epidemic.

The designers often found inspiration for the window displays from unexpected places. The strings of Christmas lights on the wall in the Farrow & Ball windows in Chicago, for example, recall the hit Netflix series Stranger Things. Explains designer Jeannie Balsam: “Our Stranger Things–inspired windows have multigenerational appeal, thus maximizing the opportunity to ignite a social media buzz and ultimately raising awareness for our charitable cause, #FaBforDIFFA.”

Boston: Our window is all about warmth, love and entertaining. Mr. & Mrs. Fox are hosting a cocktail party. Guests and visitors are encouraged to come in to have a drink and take a selfie with Mr. & Mrs. Fox. —Liz Caan, Liz Caan & CoCourtesy of DIFFA/Glenn Kulbako Photography

In the Boston window, Mr. & Mrs. Fox host a cocktail party. “Showroom visitors can meet Mr. & Mrs. Fox’s ‘forest friends,’ who have silhouette portraits painted in Farrow & Ball paints on the walls with funny quotes underneath,” explains designer Liz Caan. “Guests and visitors are encouraged to come in to have a drink and take a selfie with Mr. & Mrs. Fox.”

And Sue Appleton-Webster built the Westport, Connecticut, display around an abstract painting titled If and When by artist Victoria Wyndham. “I felt it was very apt for a window designed to raise awareness of DIFFA and the work they do,” explained Appleton-Webster, adding: “If we are able to overcome prejudices and become better informed about AIDS and when research and health care are better funded, it may lead to a much brighter future.”

Click on the slideshow above for more Farrow & Ball window displays and statements from designers.

“DIFFA is honored to partner with Farrow & Ball for the second annual Windows By Design! We are grateful for their support and for each participating designer for dedicating their time and talents to help us raise funds and awareness to fight against HIV/AIDS,” said interim DIFFA executive director Barbara Prete in a DIFFA press release. “Each designer uniquely interprets our mission, translating our values into inspiring vignettes. We hope this inspires people nationwide to make a difference!”

The displays will be up through January 2018. According to DIFFA, the participating designers include:

National Survey to Assess Attitudes on HIV Criminalization Among PLHIV 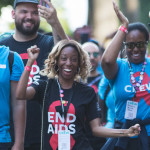 Boston: Our window is all about warmth, love and entertaining. Mr. & Mrs. Fox are hosting a cocktail party. Guests and visitors are encouraged to come in to have a drink and take a selfie with Mr. & Mrs. Fox. —Liz Caan, Liz Caan & Co Courtesy of DIFFA/Glenn Kulbako Photography
Westport, CT:  The winter whites and silver for the holidays tie in with the large original abstract painting titled “If and When” by Victoria Wyndham. I felt it was very apt for AIDS awareness. —Sue Appleton-Webster for Swoon Courtesy of DIFFA/Paul Johnson Photography
Upper West Side, NYC:  The charming scenery of the Farrow & Ball Gable wallpaper in the white-and-cream color way had an almost Scandinavian feel to it, which became the inspiration for a Nordic winter wonderland. —Joshua Greene, Hernandez Greene Courtesy of DIFFA/Sakeenah Saleem
Chicago: Our “Stranger Things”–inspired windows have multi-generational appeal, thus maximizing the opportunity to ignite a social media buzz —Jeannie Balsam, Jeannie Balsam Interiors Courtesy of DIFFA/Tina Smothers Photography
Los Angeles: Our take on the Triadisches Ballet from 1922 features Bauhaus shapes in Angeleno colorways of stucco pink, sunshine yellow, and cobalt blue. —Hopie Stockman & Lily Stockman, Block Shop Textiles Courtesy of DIFFA/Chris Wood MRP
Paramus, NJ:  Our design took the form of a gift-wrapping workshop and is intended to capture the festive spirit of the holidays, without referencing one holiday in particular. —Virginia Toledo, Toledo Geller Courtesy of DIFFA/Jacob Snavely Photography
Santa Monica, CA:  I wanted to create a whimsical window into the world of Shabby Chic & Farrow and Ball. I used rich wallpapers and the prettiest palette of paints to create a magical wonderland. —Rachel Ashwell, founder of Shabby Chic Courtesy of DIFFA/Chris Wood MRP
Berkeley, CA: Our theme is “Give Love.” The paper illustrates that we are all “cut from the same paper.” We strung the paper people in front of a heart to make our point that we all need that basic, human love this coming year!” —Alison Pickart Courtesy of DIFFA/Chi Fang Photography
Greenwich, CT:  Harsh winter days lend themselves to truly embracing the comforts of home. The holiday tones we chose are based on those used by the royal family. —Robert Passal for Putnam & Mason Courtesy of DIFFA/Paul Johnson Photography
Upper East Side, NYC:  As David Hockney said, “I prefer living in color.” We couldn’t agree more. Farrow and Ball color Blazer #212 and famed artist Keith Haring inspired us to create a bold window that celebrates peace and inclusiveness. —Andrew Petronio Courtesy of DIFFA/JCDZ Photography
D&D Building, NYC:  The Wisteria flower symbolizes new beginnings. Its long life bestows the symbolic meaning of immortality and longevity. It is where hope resides, and helps us shift our darkness into light. —Peti Lau for fuigo Courtesy of DIFFA/JCDZ Photography
Brooklyn, NYC: This bold wallpaper paired with the traditional antique rug, bench, and eighteenth century portraiture, breathed new life into these period pieces. —Jenny Wolf, Jenny Wolf Interiors Courtesy of DIFFA/Meagan Rachman
Flatiron, NYC:  Farrow & Ball paints and wallpapers were collaged to create a Tree of Life—a universal symbol of life, love, joy and hope across all religions and cultures. —Kimille Taylor for fuigo Courtesy of DIFFA/Rachman Photography
Washington, DC:  Within this cozy scene, we’re reminded how far-reaching AIDS is. The picture frames are empty, alluding to the 35 million people we’ve lost to this insidious disease. AIDS does not discriminate. —Annie Elliot for Bossy Color Courtesy of DIFFA/Karen Sayre
Orange County, CA:  Our “Alpine Snow Globe Love” concept symbolizes the playful spirit of winter with sledding teddy bears and hand-made Farrow & Ball wallpaper snowflakes. —Michele Prata, Prata Studio Interiors Courtesy of DIFFA/Melissa Mundig
Pasadena, CA: Our goal is to keep the message of the project at the forefront of our display. We hope our window will warm hearts and bring awareness to this cause that is close to the heart of the design community. —Samantha Williams, Ederra Design Studi Courtesy of DIFFA/Melissa Mundig