ACT UP brought an HIV/AIDS agency to life in Shreveport, Louisiana.

Robert Darrow never planned to form a chapter of ACT UP in his home town of Shreveport, Louisiana. He couldn’t have imagined he would become the executive director of the city’s first HIV/AIDS organization, either. Robert’s only intention, really, was to return to his hometown to die.

Robert was living in New York City in the mid 1980s, volunteering as a receptionist at Community Research Initiative, the grassroots project of Joseph Sonnebend, MD, a historic figure of the early AIDS epidemic.

“I was diagnosed in 1985,” Robert explains. “I had a few T-cells, maybe three or four. I was thinking of moving back to Shreveport, because I thought my time and luck was running out. Everyone that I knew during that time was dying.”

One day when Robert was volunteering, the agency got a phone call from Chuck Selber, a man from Shreveport who was inquiring about new HIV treatments. Chuck had just returned home to Shreveport himself, having made the move for the same reasons that were weighing on Robert. Hearing a voice from home, someone in a similar circumstance, was a catalyst for Robert. He took action.

“I moved back home and met Chuck Selber,” Robert says, “and a small group of us formed an ACT UP Shreveport chapter. We became very active in educating the medical community, sometimes through protest and sometimes through educational seminars. We attended actions at the Centers for Disease Control and Prevention (CDC) in Atlanta and also the ‘Storm the NIH’ [National Institutes of Health] protest in Bethesda, all during the early 1990s.”

When Robert returned home, there were no services for people living with HIV in northwest Louisiana. “Once my doctor, Marcus Spurlock, MD, discovered there was Ryan White CARE Act funding coming, he applied for a grant and received funding for direct services,” Robert says. “He needed someone to administer it and he turned to me, and that’s how The Philadelphia Center was born in 1990.” 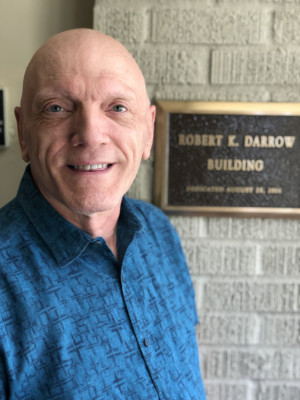 “Philadelphia is mentioned in the bible as the city of brotherly love,” Robert says, “and Dr. Spurlock is a religious man. He chose the name, based on brothers helping brothers, because of the number of gay men affected by the disease.”

With Robert as executive director, the agency had no more than that first grant and about $5,000 in cash. Robert needed backup. “I only knew my friends in ACT UP,” Robert says, “so basically, ACT UP Shreveport evolved into The Philadelphia Center.”

Robert remembers how difficult the early days of The Philadelphia Center were, in a city that was unwelcoming at the time, to put it lightly. “People actively fought against our existence, not to mention having a building in the city. The preachers were preaching about God’s wrath. The medical community was the worst, really. That was a challenge we faced that larger cities did not. The real heroes to me are activists in small towns across America.”

(Much of the struggle faced by The Philadelphia Center and ACT UP Shreveport is brought to life in the documentary Small Town Rage: Fighting Back in the Deep South, an award-winning film that has been making the film festival circuit.)

“We had physicians trying to decide where to put the AIDS clinic,” Robert recalls, “and if it was going to be in a medical building, they wanted huge exhaust fans to carry the air we breathed out of the building. In the hospitals, they would open the doors to deliver food but not come in. Just slide the trays across the floor.”

Within a few years, the man who initially inspired Robert, Chuck Selber, would die of the disease that had brought him home. “It was a day by day type situation,” Robert remembers. “I was in daily contact with people living with AIDS here, and I was seeing death and dying on a daily basis. So of course, I just knew my time was coming anyway. I tried to make the most out of every day and make a difference, knowing I wouldn’t have long. Time was very precious.”

But that is where the story of The Philadelphia Center turns away from its original tragedy. Despite so many roadblocks, the objections of the local community, and limited funding, the agency thrived.

Today, The Philadelphia Center directly serves over 500 clients, plus their family members. It has a prevention department, which includes education and condom distribution, several mobile vans, a wellness clinic with access to pre-exposure prophylaxis (PrEP), numerous support groups and an advocacy department.  Offsite, it has opened a residential facility comprised of three historic homes for men and women who are recovering from addiction.

And Robert, who left his position at the agency in 1995 to return to school, has had a renaissance of his own.

In December of 2018, Robert received his Doctorate of Education in Leadership from Louisiana State University. “It feels very humbling that I was able to accomplish that,” Robert says, “when so many of my peers and friends are no longer with me. I just hope to continue helping out my community.” Robert has also returned to one of his original loves, theater, and works full time as managing artistic director of Shreveport Little Theater.

Robert’s health remains stable, in spite of some long-term effects of HIV medications. “My viral load is undetectable,” Roberts says, “so my only problems health-wise have been from the amount of meds I have taken over the years.”

Those concerns do not hamper Robert’s sense of gratitude.

“I came home to die, originally,” he says. “As it turns out, I was a caregiver for my late father in 2014, and then for my brother in 2018, and now my mother, who has severe dementia. Ironically, I’m still living. But I do feel that time is short. I’m 60 years old now. I’ve bought a new house, because I want to get the most out of life.”

“That grim reaper has been right over my shoulder. He’s laughing at me,” Robert adds. “And I’m laughing right back at him.”