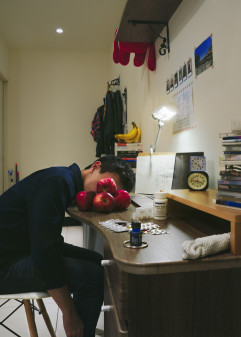 A conceptual art series that humanizes a diverse population of HIV-positive individuals through portraiture and storytelling.

Our DNA, the map of our genetic information (our growth, development, functioning, and reproduction), is 99.9% the same for each and every one of the 7-plus billion people living on Earth. That said, while we share common genetic bonds, our social, cultural, and emotional experiences are unique. This duality is significantly addressed by two of the foremost figures in developmental psychology: Jean Piaget (1896-1980) and Lev Vygotsky (1896-1934). The research of Piaget and Vygotsky signified that it is a combination of ‘Nature’ and ‘Nurture,’ that accounts for a person’s development. In other words, while we all have the natural ability to learn and develop, how we perceive the world largely depends on our experience and education.

Being that we are so similar in our genetic makeup, yet different due to our cultural uniqueness, the way we address issues that affect health and well-being can be complex and problematic. For example, one of the greatest stigmatized health related issues of the modern era is HIV/AIDS. The fact that HIV is a stigma among civilization is ironic, because a person who is infected can look and feel perfectly fine and may not even know they have the virus for many years. Furthermore, medical breakthroughs have greatly enhanced the prognosis and care for those infected with the virus. With medicine and regimen, an HIV-positive person can live a long and healthy life. In spite of all this, cultural perspectives of HIV/AIDS still discriminate against the individuals living with the virus. Judgemental viewpoints and lack of empathy for individuals living with HIV can be far more traumatic and damaging than the actual virus.

If there is one thing that should be made perfectly clear regarding nearly all physiological concerns, it is that viruses like HIV don’t discriminate and human bodies are ample hosts to these viruses despite a person’s gender, sexual identity, race, or economic status. It is this denial, coupled with sexual and racial biases, that contributes to the greater failure of HIV/AIDS awareness. Society’s struggle to come to terms with the social and cultural issues surrounding HIV/AIDS is clear based on the lack of empathy and understanding for those living with HIV.

While the culture at large is lagging to address these issues, the arts community has had a resounding impact in providing awareness and activism around HIV/AIDS. For example, The AIDS Coalition to Unleash Power (more commonly known as ACT UP) uses visual symbolism and creative expression to stage poignant public protests and interventions (such as ‘die ins’), which call for affordable healthcare and non-discriminatory treatment for people living with HIV/AIDS. Works of visual art by artists such as Hunter Reynolds, David Wojnarowicz (1954-1992), Felix Gonzalez-Torres (1957-1996), Martin Wong (1946-1999), and the artist collective General Idea, symbolize the struggle as well as the resilience of HIV-positive individuals and cannot be discussed without mentioning the ongoing pandemic of HIV/AIDS.

Kairon Liu’s Humans as Hosts is a conceptual art series that humanizes a diverse population of HIV-positive individuals through portraiture and storytelling. Liu has been communicating and networking with citizens of Taiwan and the United States in order to present their experiences living with HIV and reflect upon how it has affected their social, emotional, and professional lives. The title of the series has both symbolic and literal meaning, which is significant to the thematic perception. To be a host is defined, according to select definitions provided within several dictionaries as:

Furthermore, according to dictionary sources (see: Merriam-Webster), the root of the word host comes from the Latin word, hostia, which refers to an offering, usually of an animal, as a sacrificial victim.

These definitions and the root meaning of host are meaningful in interpreting and discussing Kairon Liu’s Humans as Hosts in both a subjective and literal sense. The subjects of Humans as Hosts assume the role as hosts on a social and emotional level, because by participating in the project, they are inviting the viewer into their personal lives. This hosting process includes their agreement to have their photographs taken, their stories written down, and their intimate items displayed to a public audience (both online and in art galleries). They are all hosts to the virus, although it has affected them in different ways. Their stories, the culmination of interviews conducted by Kairon, are both heartbreaking and inspiring. They remind us that humans have an inclination to survive and persevere even when things around them or inside of them seem bleak. Kairon’s impetus for Humans as Hosts has powerful autobiographical roots, which symbolize the cathartic nature of his artwork. He has expressed this sense of abreaction through the depiction of his alias, a man named “tree,” who overcomes heartbreak and betrayal to persevere, rebuild his self-esteem, and inspire others to value themselves. This is not just the narrative of survivors, but the story of courageous fighters.

While medical science has made several important advances in HIV/AIDS treatment, individuals who are HIV positive are still victims of ongoing emotional and physical affliction due to the virus. It is because of awareness and activism that the overall condition has improved for those affected by the virus. Both historically and presently, HIV-positive survivors have made significant sacrifices to fight for the equal, equitable, and just treatment of individuals throughout the world. As long as the virus continues to live inside of human hosts, these survivors will advocate for humane and holistic treatment. Art is just one of the many ways that activists have presented their condition to the world, however, it may be the most profound medium to inspire social and cultural change in relation to the AIDS pandemic.

Art has stood the test of time. As the earliest recorded form of communication, visual art has endured civilizations and communities across the globe. Because objects of art remain long after the generation that created it, Humans as Hosts will preserve the memory and personal expression of each individual for future generations to observe and reflect upon. However, art’s most powerful function is to serve as an expression and account of the period it is created in, and in that sense, Humans as Hosts serves as a stark and vital reminder of the HIV/AIDS crisis and its effects on generations young and old. Hopefully in the very near future, a cure for the HIV/AIDS pandemic will be realized. When it is, it will be in large part, due to the hard work and personal sacrifice on the part of artists and activists who are humanizing this global condition and raising our awareness, understanding, and empathy for our fellow human beings.

Humans as Hosts, along with several autobiographical portraits and multi-media works, are the contents of Kairon Liu’s first solo show in the United States, Luv Till It Hurts, which was organized by the artist-led collective Luv ’til it hurts. Liu is the first artist to be featured within the international (actually, in their own words ‘interplanetary’) collective, whose mission is to address accountability for the stigma around HIV through curating exhibitions, advocating healthcare options, organizing (and the exchange of ideas within) cultural movements, and other new strategies that offer responsible social and emotional support and creative solutions to the pandemic of HIV/AIDS.

ACT UP and END AIDS!

Shooting an apple off one's child's head (from the series Humans as Hosts), 2018Kairon Liu

Adam Zucker is an artist, curator, and educator based in New York City. As an independent curator, Adam has organized multiple gallery and museum exhibitions throughout the United States. He is interested in the interconnection between art, activism, and education. More of his writing can be found on his blogs Artfully Learning and Rhino Horn Group.

Kairon Liu (b.1992, Taipei, Taiwan) is a visual artist and AIDS activist currently based in New York. Kairon’s practice reflects his observations concerning beliefs in human society through the creation of narratives, exploring different issues related to religion, disease, and universal values. The exhibition Luv Till It Hurts is a part of Reimagine End of Life in NYC, a week of exploring big questions about life and death. The story goes that two artist projects focused on HIV—Humans as Hosts & Luv ’til it Hurts—’met’ in NYC, and the exhibition tells the story of Kairon’s journey with the virus (and his companions).

In conjunction with the exhibition, an evening of informative and inspirational discussions and performances titled "A discussion to be accountable to," will be held on Saturday, October 27th at The Center at 208 W 13th St, New York, NY 10011.

This article was originally posted on Rhino Horn Group.