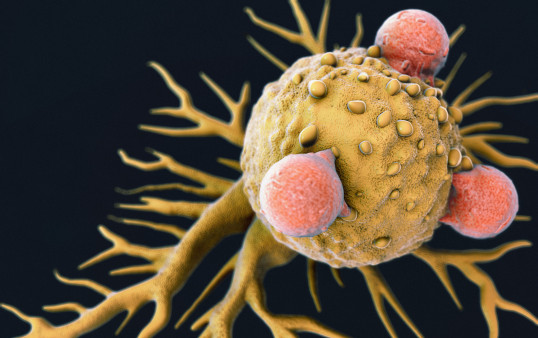 Cancer Immunotherapy Is Safe for People With HIV

Treatment with Opdivo appears to work well for HIV-positive people in small study.

Checkpoint inhibitor immunotherapy appears to be well tolerated and is not associated with viral load rebound in people with HIV who are being treated for cancer, according to a poster presented at the European Society for Medical Oncology (ESMO) 2018 Congress, taking place this week in Munich.

Immunotherapy, which helps the immune system recognize and attack cancer, offers a promising new approach to treatment, although current therapies do not work for all patients or for all types of cancer.

As people with HIV live longer thanks to effective antiretroviral therapy, non-AIDS-related cancers have become a major cause of illness and death. To date, there has been little research on immunotherapy for cancer treatment in people living with HIV. HIV-positive people have generally been excluded from clinical trials of new cancer therapies, but case reports are starting to accumulate. Some immunotherapies have also played a role in HIV cure research.

Aurélien Gobert, MD, PhD, of Groupe Hospitalier Pitié Salpêtrière in Paris, and colleagues looked at the efficacy and tolerability of the immune checkpoint inhibitor Opdivo (nivolumab) used by patients in the French national CANCERVIH database. The analysis focused on 470 people whose cases were presented to ONCOVIH, a national multidisciplinary committee that consults on cancer in people living with HIV.

Opdivo is a monoclonal antibody that blocks the PD-1 receptor, an immune checkpoint on T cells. CD8 killer T cells are the immune system’s main cancer fighters, while CD4 helper T cells are the primary target of HIV.

PD-1 plays a role in regulating immune function. Some tumors can hijack PD-1 to turn off immune responses against them. Drugs that block the interaction between PD-1 and its PD-L1 binding partner can release the brakes and restore T-cell activity. Immune-related adverse events are a concern with these medications. In addition to restoring immune responses against cancer cells, they can also take the brakes off the immune system more broadly, leading to excessive inflammation of healthy tissue.

PD-1 checkpoint inhibitors work best against so-called hot tumors that attract immune cells. If killer T cells are not present in the tumor, the drugs can’t boost their activity. It is not yet clear whether impaired immune function in people with HIV could reduce the effectiveness of these medications, or conversely, lower the risk of side effects related to an overactive immune response.

Since May 2014, immunotherapy was proposed for 35 individuals, of whom 20 were treated; 19 had metastatic non-small cell lung cancer (NSCLC) and the remaining patient had metastatic melanoma. Most were men around 60 years old, Gobert said.

At the time of cancer diagnosis, 17 of the 20 patients had undetectable viral load and the median CD4 T-cell count was 338 cells/mm3, indicating modest immune suppression. Over a follow-up period of 11 months (ranging from one to 28 months), they received a median of six Opdivo infusions—although the longest-treated person had more than 50 injections.

No deaths due to drug toxicities or immune-related adverse events were observed during follow-up. Only one person experienced a rising HIV viral load and decreasing T-cell count, but that patient had stopped taking antiretroviral therapy.

Among the 20 treated individuals, four (20 percent) achieved partial tumor shrinkage, two (10 percent) had stable disease, 11 (55 percent) experienced disease progression and three (15 percent) could not be evaluated for treatment response. There were no complete responses. This was similar to the response rate for HIV-negative people with NSCLC seen in the CheckMate-057 trial.

Based on these preliminary data, the researchers concluded, “treatment with anti-PD-1 inhibitors seems to be feasible in people with HIV.” Antiretroviral therapy should not be interrupted and CD4 lymphocyte count and HIV viral load should be monitored during treatment, they said, adding that people with HIV should be included in dedicated clinical trials of checkpoint inhibitors.

“Although the response data is fairly consistent with results obtained with the same drug among other cancer patients, the size of our sample and the length of follow-up do not allow us to draw any conclusions regarding efficacy,” Gobert said in an ESMO press release. “We know that few patients respond to immunotherapy, but those who do respond for long periods of time and thus have significantly improved survival. This seems to have been the case for the melanoma patient in our cohort, but the study is too recent for us to quantify survival rates at this time.”

[Editor’s note: this reported has been updated to reflect additional information received from the study authors.]

Click here for a report about checkpoint inhibitors for Kaposi sarcoma.