A new report from UNAIDS in advance of World AIDS Day shows that HIV discrimination, stigma and criminalization are costing lives.

Analysis by the United Nations ahead of World AIDS Day reveals that inequalities are obstructing the end of AIDS. On current trends the world will not meet agreed global targets on AIDS. But the new report by the Joint United Nations Programme on HIV/AIDS (UNAIDS), Dangerous Inequalities, shows that urgent action to tackle inequalities can get the AIDS response on track.

UNAIDS set out earlier this year that the AIDS response is in danger—with rising new infections and continuing deaths in many parts of the world. Now, a new report from UNAIDS shows that inequalities are the underlying reason why. It shows how world leaders can tackle those inequalities, and calls on them to be courageous to follow what the evidence reveals.

Dangerous Inequalities unpacks the impact on the AIDS response of gender inequalities, of inequalities faced by key populations, and of inequalities between children and adults. It sets out how worsening financial constraints are making it more difficult to address those inequalities.

The report shows how gender inequalities and harmful gender norms are holding back the end of the AIDS pandemic. 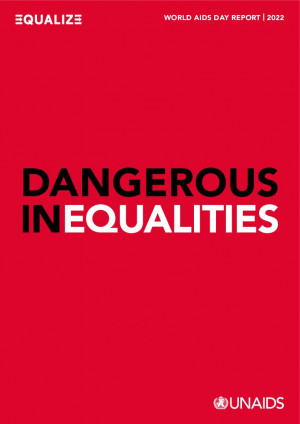 “The world will not be able defeat AIDS while reinforcing patriarchy,” said UNAIDS Executive Director Winnie Byanyima. “We need to address the intersecting inequalities women face. In areas of high HIV burden, women subjected to intimate partner violence face up to a 50% higher chance of acquiring HIV. Across 33 countries from 2015-2021 only 41% of married women aged 15-24 could make their own decisions on sexual health. The only effective route map to ending AIDS, achieving the sustainable development goals and ensuring health, rights and shared prosperity, is a feminist route map. Women’s rights organizations and movements are already on the frontlines doing this bold work. Leaders need to support them and learn from them.”

The effects of gender inequalities on women’s HIV risks are especially pronounced in sub-Saharan Africa, where women accounted for 63% of new HIV infections in 2021.

Adolescent girls and young women (aged 15 to 24 years) are three times more likely to acquire HIV than adolescent boys and young men of the same age group in sub-Saharan Africa. The driving factor is power. One study showed that enabling girls to stay in school until they complete secondary education reduces their vulnerability to HIV infection by up to 50%. When this is reinforced with a package of empowerment support, girls’ risks are reduced even further. Leaders need to ensure all girls are in school, are protected from violence which is often normalized including through underage marriages, and have economic pathways that guarantee them a hopeful future.

By interrupting the power dynamics, policies can reduce girls’ vulnerability to HIV.

Harmful masculinities are discouraging men from seeking care. While 80% of women living with HIV were accessing treatment in 2021, only 70% of men were on treatment. Increasing gender- transformative programming in many parts of the world is key to halting the pandemic. Advancing gender equality will benefit everyone.

The report shows that the AIDS response is being held back by inequalities in access to treatment between adults and children. While over three quarters of adults living with HIV are on antiretroviral therapy, just over half of children living with HIV are on the lifesaving medicine. This has had deadly consequences. In 2021, children accounted for only 4% of all people living with HIV but 15% of all AIDS-related deaths. Closing the treatment gap for children will save lives.

Discrimination against, stigmatization and criminalization of key populations are costing lives and preventing the world from achieving agreed AIDS targets.

New analysis shows no significant decline in new infections among gay men and other men who have sex with men in both the western and central Africa and eastern and southern Africa regions. Facing an infectious virus, failure to make progress on key populations undermines the entire AIDS response and helps explain slowing progress.

Around the world, over 68 countries still criminalize same sex sexual relations. Another analysis highlighted in the report found that gay men and other men who have sex with men who live in African countries with the most repressive laws are more than three times less likely to know their HIV status than their counterparts living in countries with the least repressive laws, where progress as far more rapid. Sex workers who live in countries where sex work is criminalized have a 7 times greater chance to be living with HIV than in countries where sex work is legal or partially legalized.

The report shows progress against inequalities is possible and highlights areas where the AIDS response has made remarkable progress. For example, while surveys among key populations often highlight lower service coverage among key populations, three counties in Kenya have achieved higher HIV treatment coverage among female sex workers than among the general population of women (aged 15-49 years). This has been helped by strong HIV programming over many years, including community-led services.

“We know what to do to end inequalities,” said Ms Byanyima. “Ensure that all of our girls are in school, safe and strong. Tackle gender based violence. Support women’s organisations. Promote healthy masculinities—to take the place of the harmful behaviours which exacerbate risks for everyone. Ensure services for children living with HIV reach them and meet their needs, closing the treatment gap so that we end AIDS in children for good. Decriminalize people in same-sex relationships, sex workers, and people who use drugs, and invest in community-led services that enable their inclusion—this will help break down barriers to services and care for millions of people.”

The new report shows donor funding is helping catalyse increased domestic funding: increases in external HIV funding for countries from PEPFAR and the Global Fund during 2018-2021 were correlated with increases in domestic funding from a majority of national governments. New investments to address HIV-related inequalities are urgently needed. At a moment when international solidarity and a surge of funding is most needed, too many high-income countries are cutting back aid for global health. In 2021, funding available for HIV programmes in low- and middle-income countries was US$ 8 billion short. Increasing donor support is vital to getting the AIDS response back on track.

Budgets need to prioritize the health and well-being of all people, especially vulnerable populations that are most affected by HIV-related inequalities. Fiscal space for health investments in low- and middle-income countries needs to be expanded, including through substantial debt cancellation and through progressive taxation. Ending AIDS is far less expensive than not ending AIDS.