David Fredricks, MD, chaired a session on the microbiome during the 3rd Symposium on Infectious Diseases in the Immunocompromised Host, held in Seattle June 10-11. Photo by Robert Hood / Courtesy of Fred Hutch News Service

Experts discuss rapid changes in cancer treatment and in the management of infections that can accompany these therapies.

Cancer and infectious disease researchers convened in Seattle last week to focus on one of the most complex challenges in medical science: stopping infections in patients whose immune systems are knocked down by disease or by an organ or blood stem-cell transplant.

Sponsored by Fred Hutchinson Cancer Research Center, the 3rd Symposium on Infectious Diseases in the Immunocompromised Host, held June 10-11, revealed a vibrant medical landscape marked by rapid changes in cancer treatment and in the management of infections that can accompany these therapies.

Symposium participants focused on new ways to diagnose, prevent or treat the infections that may accompany both traditional transplants and new therapies that boost or modify a patient’s immune system.

“We have shown here how complicated things get when we treat our patients,” said Michael Boeckh, MD, PhD, head of Infectious Disease Sciences at Fred Hutch and organizer of the conference, which drew more than 225 doctors, researchers, pharmacists, advanced-practice providers and medical trainees from six continents.

“There is not always one answer, and sometimes we have to put together everything we ever learned in medicine to understand complexities at this intersection of infection and the immune system,” Boeckh said.

Topics ranged from respiratory infections and fungal diseases to deciding what anti-microbial treatments to use on immune-compromised patients in an environment where effective drugs, particularly antibiotics, are endangered by rapidly developing resistance from the microbes they are intended to stop.

Five themes emerged during the two-day session, all reflecting the changes underway in this field.

The emergence of certain cancer treatments involving genetically modified immune cells — called CAR T-cell therapies — has brought with it a slate of questions about how an immune system re-engineered to fight cancer can cope with its normal defensive chores of guarding against infection. Hutch researcher Josh Hill, MD, noted that several studies have shown that patients who suffer the feverish “cytokine-release syndrome” as the newly engineered cells proliferate and attack their cancer are also the most vulnerable to infections after treatment. The more severe the syndrome, the greater the likelihood of subsequent infection.

Hill said studies are underway to explore how well patients are protected from infection well after successful CAR T-cell therapy. “Once a patient is treated, they go back into the community, and we don’t know what their long-term infection risk is,” Hill said.

Also uncertain is whether these patients will maintain protection from childhood vaccinations, if they need infusions of protective antibodies (called intravenous immunoglobulin, or IVIG, treatment), or if they can respond to revaccination after therapy.

“The big question in this room is when do we vaccinate? When do we give IVIG? Who needs to get it?” Hill said.

Since the early days of bone marrow transplantation, cytomegalovirus, a member of the herpes family, has been a major killer of immune-compromised patients. In November 2017, just a few months after the previous Hutch symposium was held in Seattle, the U.S. Food and Drug Administration approved letermovir, a new antiviral targeting CMV infection in transplant patients.

Genovefa Papanicolaou, MD, of Memorial Sloan Kettering Cancer Center in New York cited newly published research that patients taking the new drug were less likely to die of all causes after 48 weeks. The research also showed that use of the drug can substantially reduce the use of CMV treatments such as ganciclovir and foscarnet, which have significant side effects.

The microbiome is important

The gut microbiome, the community of bacteria, viruses and fungi that inhabit our colon, is increasingly recognized as a critical factor in how the human immune system responds to hostile microbes. A session focused on infection by Clostridium difficile, a bacterium that causes diarrhea and inflammation of the colon in almost 500,000 patients a year in the U.S. and kills 29,000 of them. It afflicts those, such as transplant patients, who have taken heavy courses of antibiotics. Fred Hutch’s David Fredricks, MD, said the symposium highlighted “the important connection between the gut microbiome and susceptibility to this infection.”

For example, Casey Theriot, PhD, of North Carolina State University, in a keynote presentation, showed why a diverse selection of bacterial species in the gut microbiome can hinder replication of C. difficile through manipulation of bile acids that suppress the bug.

Essential for controlling infectious disease is accurate and early identification of the organisms that may cause it. If a test can identify the threat as a virus, rather than a bacterium, doctors will know they can stop giving antibiotics, which are useless against viruses and carry a wide range of side effects — such as killing helpful bacteria in the gut microbiome.

In a keynote address, Duke University infectious disease specialist Christopher Woods, MD, MPH, showed how tests that display which genes in a patient’s immune cells are turned on or off can identify — through distinctive patterns like fingerprints — what germs those cells are encountering. He calls it “harnessing the host responses” for diagnosis.

Using emerging technologies called single-cell RNA sequencing, it may be possible to make important diagnostic findings within five minutes, he said. “We are on the cusp of some exciting opportunities,” he said.

We need to protect our antibiotics

As Woods noted in his talk, as many as half the antibiotics prescribed to patients are not needed. Improper use of antibiotics can promote the growth of antibiotic-resistant bacteria, which are responsible for 23,000 deaths in the U.S., he said. This is of concern to transplant physicians, who prescribe lots of antibiotics and for whose patients the right antibiotic may be the difference between survival or death.

“There is a storm coming,” said Josh Wolff, MBBS, director of antimicrobial stewardship at St. Jude Children’s Research Hospital in Memphis, Tennessee. “Antimicrobial resistance affects how we are able to treat our patients and how we will be able to look after them in the future.”

Monica Slavin, MBBS, MD, an infectious-disease expert at the Royal Melbourne Hospital in Australia, explained how difficult it can be to make decisions to withhold antibiotics to prevent disease. She presented data from her hospital that showed it could do so safely with a system in place to manage bloodstream infections should they occur. She also cited a pair of studies, one Dutch and one German, that looked at whether it was safe to drop preventive treatment of transplant patients with fluoroquinolones, a potent class of antibiotics. Both studies concluded that it was safe to drop them, but in both cases, the hospitals involved elected not to.

“What drives a lot of antibiotic prescribing,” Slavin said, “is fear.”

Fred Hutch researcher Catherine Liu, MD, who is director of antimicrobial stewardship at Seattle Cancer Care Alliance, the Hutch’s clinical care partner, said advanced diagnostic technologies can help doctors decide which medicines to use and when to use them. “Being able to know when it is necessary to use an antibiotic and when it is not is critically important. I think having better diagnostics is going to be really important in helping us sort that out,” she said.

The two-day conference was also an opportunity to expose up-and-coming medical students and researchers to the excitement in this field. “One key objective of the conference was to increase participation of the next generation of clinicians and researchers in infections in the immunocompromised host,” Boeckh said. “We provided travel grants to 59 trainees, many of them women and underrepresented minorities.”

Arvin Jundoria, a third-year medical student at Howard University College of Medicine in Washington, D.C., was thrilled to attend and presented a poster on her case study of a patient who came into the emergency room in respiratory distress. His doctors discovered he was infected with HIV and had Kaposi sarcoma in his lungs, and he eventually succumbed to the disease. Her experience in Seattle only deepened her interest in infections, particularly sepsis, caused by harmful bacteria in the bloodstream.

“I want to become an emergency room physician and cure sepsis,” she said.

This article was originally published on June 17, 2019, by Hutch News. It is republished with permission. 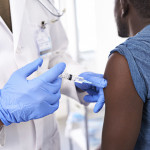