Weight gain speeds up after switching to an integrase inhibitor from a non-nucleoside reverse transcriptase inhibitor.

Among people with HIV who switch their antiretroviral (ARV) regimen to one based on an integrase inhibitor, their subsequent pace of weight gain differs based on whether they were previously taking a non-nucleoside reverse transcriptase inhibitor (NNRTI) or a protease inhibitor.

John Koethe, MD, of Vanderbilt University Medical Center, presented findings at the 2020 Conference on Retroviruses and Opportunistic Infections in Boston of a study of people with HIV who switched to an integrase inhibitor–based ARV regimen from either an NNRTI-based or protease inhibitor–based regimen.

The study population was drawn from 17 cohorts included in the multisite North American AIDS Cohort Collaboration on Research and Design. To be included in the study cohort, individuals needed to have maintained a viral load below 1,000 on their initial regimen for more than two years and to have maintained such a low viral load for an additional two years following their switch to an integrase inhibitor.

The study authors adjusted the weight-gain data to account for differences in the cohort members’ age, sex, race, cohort site, mode of HIV acquisition, calendar year, CD4 count and body mass index (BMI) at the time of their regimen switch.

When looking at the changes in the rate of weight gain based on individual integrase inhibitors, the only statistically significant increase in the rate occurred among people who switched from an NNRTI to dolutegravir. Their pre-switch weight-gain rate was 1.85 pounds per year, and their post-switch rate was 3.81 pounds per year.

The weight-gain rate shifts for those switching from protease inhibitors were all statistically significant.

The study authors further broke down their results by sex, race and age. Only the statistically significant shifts in the weight-gain rate are mentioned hereafter.

The study authors concluded that their findings may be a reflection of ways that different ARV classes and individual drugs can affect body-weight regulation and that these differences are not limited to affecting just those who start HIV treatment for the first time. 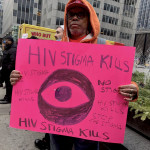