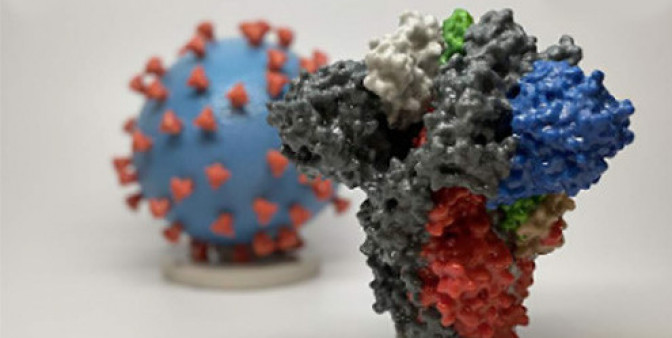 3D model of SARS-CoV2 coronavirus (back) and its spike protein (front) that enables the virus to enter human cells. Courtesy of NIH

With further testing, the antiviral proteins might be used as a nasal spray to prevent or treat COVID-19.

May 11, 2022 • By Harrison Wein and National Institutes of Health

New SARS-CoV-2 variants continue to evolve and prolong the COVID-19 pandemic. The surface of SARS-CoV-2, the virus that causes COVID-19, is covered with spike proteins. These latch onto ACE2 receptors on human cells, allowing the virus to enter and infect the cells. Mutations in spike allow the virus to evade the immune system as well as therapies designed to target it.

Monoclonal antibodies can block SARS-CoV-2 from getting into human cells and prevent infection. However, these therapies can become ineffective as different variants arise. Some approved for emergency use don’t work against the Omicron variant. Monoclonal antibodies can also be difficult and costly to produce. In addition, they require injection or IV infusion, are often not stable for long periods, and require refrigeration.

National Institutes of Health-funded researchers at Northwestern University, Washington University School of Medicine, and the University of Washington designed synthetic “miniproteins” that bound a key part of the coronavirus spike called the receptor binding domain (RBD) and prevented the virus from infecting human cells in the lab. However, certain variants could partly escape these proteins.

In their new study, the team aimed to develop proteins that could potently neutralize a range of SARS-CoV-2 variants. Spike has three RBDs. A protein that could bind all three at once, the scientists reasoned, might work against more diverse variants. Results appeared in Science Translational Medicine on April 12, 2022.

The team tested two different strategies to make what they call “minibinders.” The first was to fuse together three miniproteins that strongly bound the RBD. The second was to create miniproteins that self-assembled into structures that positioned their binding portions at the three RBDs.

After testing and tweaking, the team developed minibinders of both kinds that bound spike more strongly than any of the single proteins did alone. Using cryo-electron microscopy, they showed that both types worked as designed.

In laboratory testing, the self-assembling minibinders were able to better neutralize a range of SARS-CoV-2 variants than the fused ones. Further experiments found that the virus was much less likely to escape the self-assembling proteins through additional mutation. The minibinders that bound strongest to spike were more potent neutralizers than any currently authorized monoclonal antibodies, and were effective against variants including Omicron.

“SARS-CoV-2’s spike protein has three binding domains, and common antibody therapies may only block one,” says Dr. Michael Jewett of Northwestern University, one of the co-lead authors. “Our minibinders sit on top of the spike protein like a tripod and block all three.”

The findings suggest that a nasal spray of these proteins could protect against SARS-CoV-2 either before or after exposure. The team is now working toward human clinical trials to test such an experimental nasal spray to treat COVID-19.

This research brief was published by the National Institutes of Health on May 10, 2022.