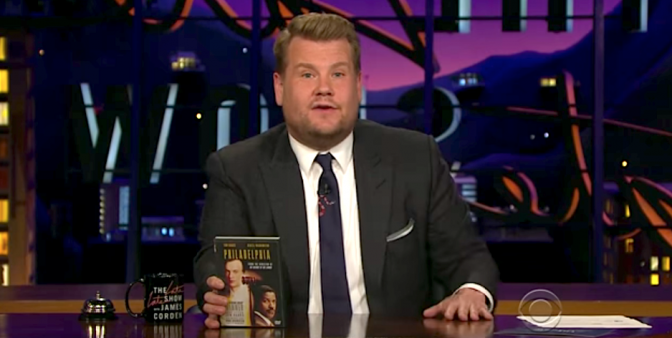 Why James Corden Sent 297 Copies of “Philadelphia” to Trump [VIDEO]

Plus: Two PACHA members explain why they remained or resigned as AIDS advisers to the White House.

Late-night talk show host and Carpool Karaoke star James Corden very much cares that six AIDS advisers to the White House resigned because “Trump simply does not care.” In a segment of The Late Late Show with James Corden, the host not only explained the HIV headlines behind the resignations but also took action to change Trump’s attitude about the epidemic: Corden announced that he sent 297 copies of the AIDS movie Philadelphia to the president at his Mar-a-Lago, Florida, resort.

Corden explains that he first learned about the epidemic from watching Tom Hanks in the Oscar-winning 1993 film. “As I learned more [about HIV], I started to care,” Corden says. “Maybe that’s the problem. Maybe Donald Trump doesn’t care because he’s never seen Philadelphia.”

Why send 297 copies? Because that’s as many as he could locate online. For example, he says, he bought all 21 copies available on Amazon.com as well as 210 from a Barnes & Noble site.

After running through several HIV-related statistics, Corden finished the segment by stating that “HIV/AIDS is something [Trump] or any president or world leader…can never afford to ignore.” He also urged viewers to visit LambdaLegal.org and get educated and support the cause.

To learn more about the six members of the Presidential Advisory Council on HIV/AIDS (PACHA) whom Corden referenced, read the POZ article “PACHA Members Resign in Protest of Trump Administration [VIDEO].”

Meanwhile, The Daily Beast followed up with two members of PACHA—one who resigned and one who remained—to get further insight into their decisions. Specifically, the article speaks with Southern AIDS Coalition (SAC) executive director Nicholas Carlisle, who remains a member of PACHA, and SAC community organizer Gina Brown, who is one of the six to resign. You can read that article here.