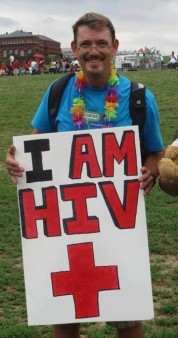 My name is Jeff Allen and I am the president of the Positive Champions Speakers Bureau Inc. I have been living with HIV for 30 years.

The Positive Champions Speakers Bureau is a group of dedicated individuals whose sole purpose is to heighten community awareness and increase compassion for people living with HIV/AIDS. Positive Champion speakers tell their stories about living with HIV and answer questions about the virus. We give presentations to schools, health care professionals, businesses, civic organizations, detention facilities and many other groups looking to bring more understanding of HIV/AIDS and to put an end to the fear and stigma that surround the disease. Our presentations are designed to educate the community about HIV/AIDS and tailored to fit the specific needs of each audience.

If you’ve just been diagnosed with HIV, your need for support and compassion couldn’t be greater. Too often HIV-positive people become targets of discrimination. On top of handling new health challenges, they sometimes face rejection by family and friends. They may be forced out of their homes, lose their jobs and become victims of violence. So often when we speak about HIV, we speak in terms of statistics and forget the faces that make up the epidemic. Having someone share their story engages the audience and demonstrates that, behind the millions of people living with the disease worldwide, every individual offers a unique story that defies stereotypes, transcends categorization and reminds us that we are all human.

Compassion from the communities most impacted by HIV and those concerned about HIV can really decrease the rate of transmission locally. Mr organization works with partners including faith-based organizations, healthcare providers, prevention programs, local businesses, pharmacies, schools and caring citizens. All help combat the spread of the virus in our community in many ways. We come together because we have a common goal: to make Volusia and Flagler counties healthier and to make an impact on the epidemic worldwide.

Here in Volusia and Flagler counties, our planning consortium recognized that stigma was one of the biggest barriers to seeking HIV testing and treatment. Our consortium decided to to see if anyone in our affected communities was interested in creating a speakers bureau to put a face to the local HIV epidemic.

There was an overwhelming response. Our very first meeting in 2011 delivered 13 individuals who were willing to put their stories out in the community to try and diminish this stigma.

Stigma still exists in many different forms. Many heterosexual men don’t want to enter an HIV facility to take a test for fear of being presumed gay. Many others don’t want the assumption that they are injection drug users. Some women don’t want to be presumed to be promiscuous or risk physical violence. Many worry they may even lose their homes or children.

Joyce Case, the executive director of the Daytona Beach office of the Health Planning Council of Northeast Florida, approached me about applying for a grant through AIDS United. With the help of Dawn Pietrewicz, I applied for the grant and it was awarded in 2012 and 2013. This funding has helped the Positive Champions Speakers Bureau become incorporated and receive its 501(c)3 status in December 2014. We bought equipment, laptops, and everything we needed to be a professional community organization.

We have delivered our message locally and at conferences around the nation. We have become a force to be reckoned with, attacking stigma by dispelling myths and stereotypes about HIV treatment, prevention and care.

Because of powerful medical breakthroughs in HIV treatment options that have enabled millions of people to live long, healthy lives with the disease, many falsely believe that we’ve won the war. With our consortium and its partners, we do a great job in addressing the local epidemic. However, the United States continues to lag behind on the global HIV care continuum, and our country has the highest AIDS-related death rate among rich nations. Faced with the reality that 20 percent of HIV-positive people are unaware of their status, and three out of four HIV-positive people in the U.S. are not virally suppressed, this is an urgent wake-up call for local, state, and federal leaders.

The CDC recommends that everyone between the ages of 13 and 64 be tested at least once, and that those at higher risk get tested at least once a year. Gay and bisexual men may benefit from getting tested more often, such as every three to six months. The CDC also encourages people who are at high risk but do not have HIV to be aware of new approaches to HIV prevention, such as pre-exposure prophylaxis (PrEP) and post-exposure prophylaxis (PEP).

The stigma that is associated with the disease

I am more than HIV.

A bird. I love to fly and would never need to get on another plane!