Buy the rabbit’s tale to support the cause—or just to annoy Mike Pence.

First, some backstory: Marlon Bundo is real (he even has his own Instagram account, see below). He’s the pet rabbit of the second family and the subject of the just-published A Day in the Life of the Vice President. As such, he’s currently on a book tour. (Pence’s daughter Charlotte wrote the book; his wife, Karen, illustrated it.)

@lastweektonight @iamjohnoliver Not gonna lie, I do look pretty fly in a bow tie. The only thing better than one bunny book for charity is...TWO bunny books for charity. #BOTUS - Marlon

But wait. Another Marlon Bundo book is topping the Pence family page-turner on the charts. Titled A Day in the Life of Marlon Bundo, this children’s tale arrives from the team at HBO’s Last Week Tonight with John Oliver.

In a segment devoted to Pence and the dueling hares (watch the entire segment in the clip atop this article), Oliver points out that the conservative vice president supports discrimination against the LGBT community and that as governor of Indiana he allowed his religiosity to impede his response to an HIV outbreak. He also has strong ties to people who believe in gay conversion therapy. 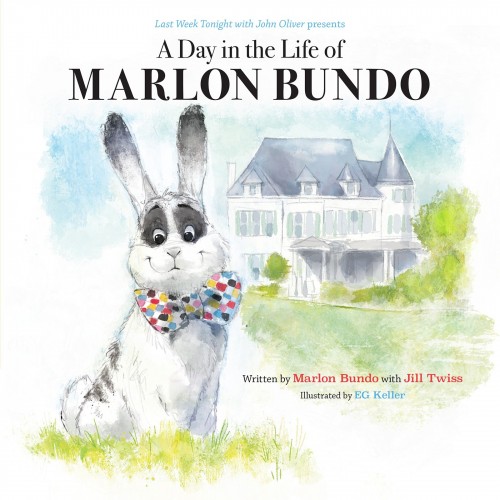 That’s why Oliver’s Marlon Bundo book is about two boy bunnies falling in love, much to the consternation of the white-haired stinkbug in charge of all the animals in the garden. All proceeds from the book go to the Trevor Project, which provides suicide prevention services to LGBT youth, and AIDS United, which works to end the AIDS epidemic in the United States. Oliver stresses that the book is actually a children’s book, not one filled with adult humor. 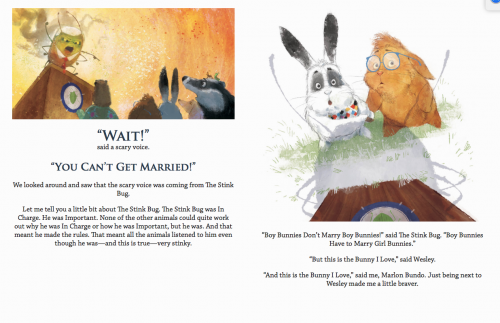 As the Daily Beast points out, 100 percent of the proceeds from Oliver’s book benefit charities, while “only an unspecified portion of the profits from the Pences’ book will go to less controversial nonprofit organizations that focus on combating human trafficking and providing art therapy to children.” Also, Charlotte Pence has put a positive spin on her competition, tweeting that Oliver’s book “is contributing to charities that I think we can all get behind. We have two books giving to charities that are about bunnies so I’m all for it really.”

.@charlipence on @iamjohnoliver’s parody book on the second family’s pet bunny: “His book is contributing to charities that I think we can all get behind... I’m all for it.” pic.twitter.com/hEWn4sX95H

You can order Pence’s book on Amazon.com and Oliver’s book at BetterBundoBook.com and FocusOnTheFurmily.com directly.

You can also download an ebook if you make a donation of $11.99 or more directly to TheTrevorProject.org/LWT or AIDSUnited.org/MarlonBundo.

Below is the book’s trailer, which ran at the end of the Last Week Tonight episode:

For more POZ coverage about the Indiana HIV outbreak, click here. For our cover story about the ways gay conversation therapy fuels the HIV epidemic, read “Thou Shalt Fear AIDS.”