Nearly half of people living with HIV in the United States are 50 or older, and National HIV/AIDS and Aging Awareness Day is coming up Friday, September 18. In observance of the day, you can participate in two virtual (and free!) discussions held the day before and featuring Anthony Fauci, MD, whom you likely recognize as a member of the White House’s coronavirus task force; AIDS United’s Ronald Johnson; POZ’s editor-in-chief Oriol R. Gutierrez Jr.; and a variety of specialists, advocates and long-term survivors. Here are the details:

“Aging With HIV: Surviving Another Pandemic”

Hosted by: GMHC’s National Resource Center on HIV and Aging

Speakers: The two keynote speakers are Fauci, who is also the director of the National Institute of Allergy and Infectious Diseases, and Johnson, a senior policy fellow at AIDS United. Additional speakers are:

“Older people living with HIV are now facing the dual threats of COVID-19 and comorbidities connected to aging with HIV,” said GMHC’s Louie in a press release from the longtime AIDS service organization originally known as Gay Men’s Health Crisis. “This webinar will provide an unprecedented opportunity to hear from leading experts about how to reduce the risks to health and well-being from both diseases while building resilience.”

Older adults living with HIV “are exhibiting higher rates of illnesses associated with aging—cardiovascular, liver and kidney diseases, cancers, frailty and osteoporosis,” added Karpiak, GMHC’s lead researcher on HIV and aging. “They are socially isolated due to HIV/AIDS stigma and find themselves especially impacted by the COVID-19 epidemic, which exacerbates their already high rates of depression, posttraumatic stress disorder (PTSD) and loneliness as they age.”

The GMHC webinar is free, but advanced registration is required. You can do so by clicking here.

Below is the information about the POZ at Home event. 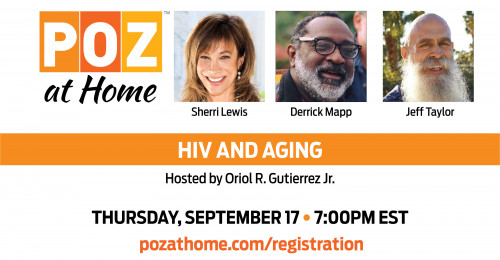 Hosted by: POZ at Home

This episode of POZ at Home will focus on the challenges of growing older while living with HIV. The event is free, and you can register at pozathome.com/registration. The episode will also stream live on the POZ Facebook page.

POZ at Home is a series of Zoom events that bring the community together to discuss HIV-related topics. You can watch recordings of previous discussions, including “Coping With COVID-19 and HIV,” “When Is Fat Not Just Fat: A Discussion About Hard Belly and Visceral Fat” and “Pioneering Researchers Talk AIDS History.”