Plus: What’s a “vulnerability hangover”?

Jonathan Van Ness, the flamboyant self-care and grooming expert on Netflix’s Queer Eye, has opened up about living with HIV and facing other challenges, including addiction and sex abuse. Van Ness disclosed these personal details—including the fact that he received his diagnosis at Planned Parenthood—in a New York Times profile published over the weekend and before the release of his memoir, Over the Top: A Raw Journey to Self-Love. 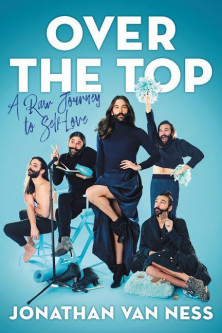 Jonathan Van Ness’s memoir “Over the Top” is out September 24.Courtesy of HarperCollins

“I’ve had nightmares every night for the past three months because I’m scared to be this vulnerable with people,” Van Ness, 32, told the newspaper. “It’s hard for me to be as open as I want to be when there are certain things I haven’t shared publicly. These are issues that need to be talked about.”

"The Trump administration has done everything they can do to have the stigmatization of the LGBT community thrive around me. I do feel the need to talk about this.”

Thank you @jvn for speaking openly about living and thriving with HIV. https://t.co/TlBj6R5Z1a

It’s hard not to be depressed about the state of our country sometimes, but seeing all of the love and support pouring out for #JonathanVanNess gives me hope about how far we’ve come as a country. @jvn thank you for living your truth - you are amazing!

If Twitter is any indication, Van Ness’s disclosure has definitely sparked discussions about these difficult subjects. Not only have fans tweeted their love and support for the energetic reality TV star, but many people have also said his story facilitated discussions with family and friends. Numerous organizations—LGBT, HIV and otherwise—also expressed support and used the disclosure to promote awareness and education, including getting the word out about undetectable equals untransmittable (U=U) and pre-exposure prophylaxis (PrEP).

We ended up having a huge conversation with our boys last night about the AIDS crisis of the late 80s - mid 90s, how it devastated communities, where that left us, the state of play now. We talked for over an hour. That’s because of @jvn - my kids love him. Brave and good man. <3

We are SO grateful that Queer Eye star @JVN has courageously opened up about living with HIV ????

When folks speak up, we get one step closer to universal knowledge/acceptance of #UequalsU

Learn more about how those living with HIV prevent transmission: https://t.co/s87Tv7da1n pic.twitter.com/BcJsdrJzfk

Important insight into Van Ness’s HIV story can be found in a New York Times opinion piece by Celeste Watkins-Hayes, PhD, a professor of sociology and African-American studies. (POZ recently interviewed Watkins-Hayes about her book Remaking a Life: How Women Living With HIV/AIDS Confront Inequality, for which she interviewed over 100 women living with the virus.) In her Times opinion piece, she makes the case that sexual abuse is an unspoken driver of the epidemic and that the Queer Eye star, unlike many people, was fortunate to have a safety net. Watkins-Hayes also highlights the significant role Planned Parenthood plays in fighting the HIV epidemic (the organization is constantly under attack and in danger of being defunded). Read her full opinion piece here.

The Times interview with Van Ness raised a topic that might not be in the common lexicon of those in the HIV community. In that article, Van Ness is described as having a “vulnerability hangover.” The term describes the feelings of dread that follow an instance of self-revelation—for example, after you disclose your HIV status. Brené Brown, PhD, LMSW, who studies human connection, coined the phrase and gave a TED Talk on the subjects of vulnerability and shame and connection (you can watch it below).

In a tweet after the Times article ran, Van Ness expressed his appreciation for Brown. “I wouldn’t be who I am without the work you’ve done,” he wrote to the researcher.

Reading the social media posts about Van Ness is heartwarming. Perhaps Gwen Chodur expressed it best in her tweet: “It’s hard not to be depressed about the state of our country sometimes, but seeing all of the love and support pouring out for #JonathanVanNess gives me hope about how far we’ve come as a country. @jvn thank you for living your truth—you are amazing!”

“We’re here with him, and we welcome him if he wants to get involved.” 100% agree with @nainadevi quoted in this article about @jvn disclosing his HIV status and using his huge public platform to help decrease stigma around living with HIV <3 https://t.co/1Aq3LbF1xO @uspwn @vice

@jvn Thank you for your honestly and for sharing your experiences. There is still so much stigma with HIV and there shouldn’t be. Thank you for shining a light!