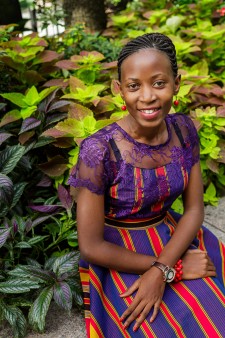 Born with HIV, Josephine Nabukenya, a native of Uganda, is a youth ambassador for the Elizabeth Glaser Pediatric AIDS Foundation. [VIDEO]

Born with HIV, Josephine Nabukenya, a native of Kampala, Uganda, is now 23 years old. She found out she was HIV positive when she was 10 years old, after coming across a testimony written by her mother stating that her entire family was living with HIV in secret. Suddenly, she understood why her family seemed to be sick all the time.

“I wasn’t supposed to read it, so I kept quiet,” says Nabukenya, recalling the stigma and discrimination that was so prevalent in Uganda at the time. She sat in silence for a year until her mother decided to disclose her status. Soon after, Nabukenya got HIV care at a local hospital.

Eventually, Nabukenya was introduced to activism through the Ariel Club, a psychosocial support group for youth living with and affected by HIV/AIDS across Uganda run by the Elizabeth Glaser Pediatric AIDS Foundation (EGPAF).

“We would have sessions about adherence, disclosure, stigma, discrimination, living with HIV,” Nabukenya recalls. Through meet-ups at local camps and activities, she became increasingly comfortable sharing her story and listening to the experiences of others. EGPAF made her one of its international youth ambassadors.

In 2005, Nabukenya was invited to speak to members of the U.S. Congress and share her story as a representative of HIV-positive children across Africa. At 12 years old, she was a celebrity across Uganda, which changed her life.

After traveling to the United States, she was known as HIV positive by all her classmates, many of whom teased her or refused to interact with her. “I had to change schools,” Nabukenya says. “The same happened in my second school. I realized that I could not run away from discrimination and stigma. I had to face it.”

In 2006, the same year she started HIV treatment, Nabukenya spoke in front of hundreds of Ugandans at World AIDS Day events in Kalangala. Six years later, she returned to the United States as one of 12 ambassadors who attended UCLA’s annual Dance Marathon fundraiser for HIV/AIDS.

Nabukenya is also a cofounder of Young Generation Alive, a student-led group that focuses on fighting stigma and discrimination across the community and encouraging positive living.

Nabukenya, who earned her degree in social work from Makerere University in Uganda, was recently recognized for her work by the United Nations and even Queen Elizabeth, who gave her the Queen’s Young Leader Award in 2016.

Despite all the global attention, Nabukenya says she plans to continue the bulk of her
advocacy at home, in Uganda.