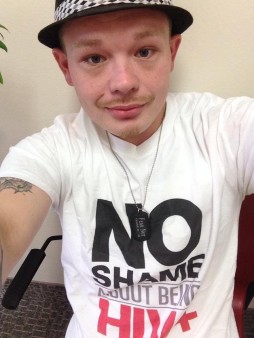 In 2010, I was diagnosed with Necrotizing fasciitis (also known as flesh-eating disease) and underwent surgery that put me into septic shock. The infection itself was enough to kill anyone but the septic shock began to shut down my kidneys and sent my blood pressure to dangerously low levels. I am lucky that I got out with my life, let alone all my limbs. Many are not so fortunate.

Afterwards I began to have flare ups of reoccurring cellulitis/MRSA and was hospitalized over 30 times in two years. It seemed like I was in the hospital every month for two to three days. I searched far and wide for an infectious disease doctor who could figure out what was going on with me. Why was a 20-year old kid going through all of this? Why was I continually being plagued with sickness at a time when I should be at optimal health?

I found someone who managed to keep me out of the hospital and keep the flare ups from happening with daily, preventative, heavy-duty antibiotics which I am still on to this day. I still had problems here and there but nothing like I had previously experienced.

In 2012, I broke up with my girlfriend of almost two years from Tijuana, Mexico. I thought we were in love and that someday we would get married and have the “white picket fence” life. This dream never came to pass.

I never really thought about the risks we were both taking. We’d been having unprotected sex because we were trying to have a baby. Somehow we thought that having a kid would solve our problems. I thank God that it never happened. I think he intervened, as he knew there was a different avenue my life would soon take.

Emotionally, I knew that the best thing to do was break up. But I was distraught and didn’t know how to handle losing the girl I had fallen in love with. I began to go out and live a fast lifestyle. I was partying and clubbing and trying to forget what had happened in my life. I would often have one-night stands. Many times I barely knew the girl’s name. I wasn’t always using protection because it just didn’t feel “natural.”

Over the years I had been getting regular HIV tests, not because I thought my health problems were related to HIV, but because in my eyes, it’s something you should do if you are sexually active.

I made an appointment to see my primary care physician (PCP) because I started to get symptoms of pink eye. I thought I got it because I am a bail bonds agent and am constantly working in and out of jails. While I was at the doctor, I figured I would get my annual HIV test since I was already there.

Everything went as it normally did. In my mind, I thought I was invincible and that HIV would certainly never happen to me. I took the test so I could check it off my list and put myself at peace by taking the proper steps for my health. I never received a follow-up phone call with my results, which surprised me, but I figured they were busy or just forgot.

The next week, on June 5, 2012, I went to my infectious disease doctor for a follow-up appointment regarding my leg. We discussed my leg and how everything was going. Then he told me he knew I had taken an HIV test with my PCP the week prior (since they are in the same network they share medical information). I was surprised since that was not the point of my visit, but I was grateful because it reminded me that I needed to call my PCP for my results.

That’s when he told me he had my results and that they weren’t so good. I asked him what he meant. Could they not read my blood? Did I need to go do the test again? Had they lost my results? Certainly it couldn’t be because I was positive.

He followed up by saying, “Josh, I have bad news. You are HIV positive.”

It was like a ton of bricks had hit me. I tried to maintain my composure. I have always tried to appear strong on the outside even if I am breaking apart on the inside. I stared past him. I looked at the wall and tried to hold back the river of tears. But the tears soon began to pour down my face. I couldn’t hold in my emotions any longer.

My doctor then explained to me about treatment. How much HIV/AIDS has changed and how I could live a healthy normal life. It all went in one ear and out the other. I cried as I went to get the confirmatory blood work done. It seemed like an eternity and that everything was moving in slow motion.

When I left, I wanted to crash my car on the way to work. I didn’t want to have to face this. I thought to myself, “How could this have happened to me of all people?” I wasn’t the typical “stereotype” that people think of with HIV/AIDS. I wasn’t that promiscuous. I wasn’t an IV drug user. Why me?

Luckily I got came to my senses and pulled through it. I was determined to make it through this. I started to disclose my status from the get go and talking to others was my way of letting it out. I went straight to work after I was diagnosed. I told my coworkers who offered me their support and love.

I went home to tell my parents. I told my mom first. She was devastated. I was ashamed. We spent hours crying together but she let me know it didn’t change the love that she and my dad had for me. I told my dad the next morning right before he went to work. He gave me the biggest hug he has ever given me. He assured me that whatever we had to do to get through this we would.

The hardest person to disclose to was my ex-girlfriend. We had been broken up for months. She had destroyed me but I knew the right thing to do was to tell her. I made the call after the test results were confirmed. I could barely get the words out and when I finally did she let out a screech I will never forget in my life. It was a sound of sheer terror. I informed her that she needed to get tested. I’m still not sure if I got HIV from my ex-girlfriend (she never called me back to tell me her results) or one of several girls I had sex with after we broke up.

I began to educate myself about HIV. I made a pact with myself that I would not let this virus destroy me. I started on ARV treatment a week after I was diagnosed once my CD4 and viral load counts came back.

I was fortunate to find Maria Mejia’s videos online and she was an inspiration to me. She still is an inspiration to this day. She made me feel I was not alone. I joined an international support group for people living with HIV/AIDS founded by Maria. It has been a pillar of support throughout this process. I’m currently an admin for the page and cannot go a day without posting or reading the other posts. It helps me get through this journey.

I am very open about my status. I decided to become an activist and share my story so that others might be educated and aware that this can happen to anyone. This virus doesn’t discriminate. It doesn’t care who you are. I promote education, awareness and protection. I just began my own blog this year at pozitivehope.com and have some videos on YouTube as well. I am honored to be a blogger for positivelite.com. They are doing great work for PLWHA throughout Canada. I am constantly trying to get more involved in activism whether it be public speaking, video interviews, CDC campaigns or anywhere else my voice can be heard. It is a challenge getting the hetero story out there, but it is a story that needs to be heard. We need to see all the faces of HIV/AIDS.

This virus doesn’t define me as a person or where I go in life. I am currently studying to be a commercial airline transport pilot. I hold a full time job, take my meds and live a happy life. It certainly has been an emotional roller coaster. This journey has taught me so much. It has made me grow emotionally, mentally and spiritually. It is possible to live with this virus.

With 50,000 new infections here in the U.S. every year, we have a lot more work to do. I want to help reduce new infections as well as the stigma and discrimination surrounding this virus. I am no different than anyone else. I am human and I just happen to be one of the millions of people living with HIV/AIDS. This is my story and thank you for reading it.

What three adjectives best describe you?
Determined, patient and hopeful

What is your greatest achievement?
Obtaining my bail agent license for California. I’m currently working towards becoming a commercial airline transport pilot.

What is your greatest regret?
Not enjoying my youth as much as I should have. Not realizing how fast life passes us by. I wish I wouldn’t have focused so much on “growing up” but rather lived in the present

What keeps you up at night?
It used to be the dreams that I had as a result of Atripla’s side effects but now I am on a new med with no side effects. The stigma and discrimination surrounding HIV is something that still keeps me up.

If you could change one thing about living with HIV, what would it be?
I would change the amount that HIV/AIDS is talked about in the mainstream media. People have forgotten because it isn’t talked about. We need to be having this conversation.

What is the best advice you ever received?
We can’t change the past, however we can certainly change the future.

What person in the HIV/AIDS community do you most admire?
Maria Mejia. She has been an inspiration since the day of my diagnosis and is part of the reason I am where I am today. She is an amazing and beautiful woman both inside and out.

What drives you to do what you do?
The number of new HIV infections happening within the U.S. and throughout the world. When we have so much knowledge about this virus there is no reason so many new infections should be taking place.

What is your motto?
How we handle the situations and obstacles that life presents to us is what counts.

If you had to evacuate your house immediately, what is the one thing you would grab on the way out?
My Samoyed puppy, Lobo. He brings a smile to my face every day.

If you could be any animal, what would you be? And why?
I would choose to be some sort of eagle or bird. I love flying -- there is a certain freedom that birds have.