As the current number of Americans on PrEP hits an estimated 180,000, scant numbers of teenagers have ever taken Truvada as HIV prevention.

According to a just-released estimate from Gilead Sciences, which manufactures Truvada, 180,000 U.S. residents were currently taking the drug for HIV prevention as of mid-2018.

For their analysis on PrEP use among young adults and adolescents, researchers at Gilead analyzed national pharmacy claims data covering January 2012 through December 2017 to determine how many people started PrEP during that period. This data source is limited by the fact that it derives from only 80 percent of U.S. retail pharmacies and does not include prescriptions filled through closed health care systems (such as Kaiser Permanente, a major prescriber of PrEP in Northern California in particular), the Veterans Administration, colleges and universities and active-duty military health care systems.

It is further important to note that this analysis looked at the numbers of people starting PrEP each year, rather than the numbers of people currently taking Truvada as prevention. The data source provides no information about whether anyone who started PrEP continued taking it. Additionally, the data available provide no information on whether an individual actually took any Truvada, just that at least one prescription was filled.

Findings were presented at the International AIDS Conference in Amsterdam (AIDS 2018). 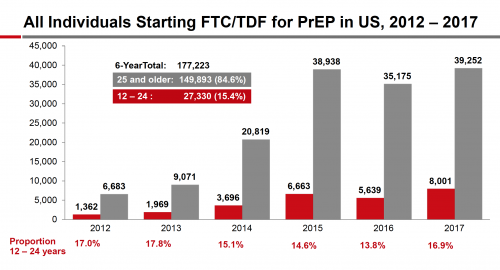 FTC/TDF is shorthand for Truvada. These figures are drawn from a somewhat limited number of U.S. pharmacies, so the true figures of people starting PrEP annually are likely at least somewhat greater.Gilead

FTC/TDF is shorthand for Truvada. These figures are drawn from a somewhat limited number of U.S. pharmacies, so the true figures of people starting PrEP annually are likely at least somewhat greater.Gilead

Of the 12- to 17-year-olds who started PrEP between 2012 and 2017, 83.5 percent were girls. Of 18- to 24-year-olds who started PrEP during this period, 84.2percent were male. When breaking down the number of starts during this period by age, the researchers found that the groups of 13- and 14-year-olds starting PrEP had the highest proportion of females, at about 92 percent. Then, with each advancing year, the proportion of females declined steadily, hitting 26 percent among 21-year-olds and finally 18.5 percent among 24-year-olds. 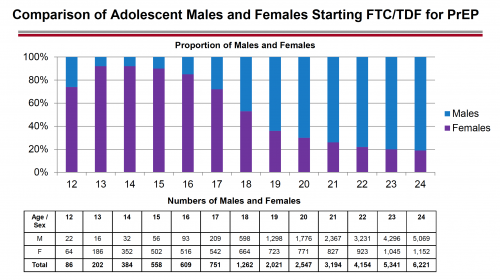 For the 12- to 17-year-olds, pediatricians were the most common prescribers of an initial PrEP prescription, handling 38 percent of cases. Emergency medicine clinicians prescribed a higher proportion of females’ initial prescriptions in this age bracket (22 percent) compared with males’ (15 percent), while family practitioners prescribed a higher proportion of males’ initial prescriptions (25 percent) compared with females’ (11 percent).