What Keeps Men Who Are Willing to Use PrEP From Actually Taking It?

Various internal and logistical obstacles likely impede the uptake of and daily adherence to PrEP as HIV prevention among gay and bi men.

Truvada (tenofovir/emtricitabine) as pre-exposure prophylaxis’s (PrEP) use among men who have sex with men (MSM) is likely impeded by the complexities of the multistep process required to pique individual interest in PrEP and ultimately get men to adhere to the daily drug regimen.

Researchers from the One Thousand Strong study that is following more than 1,000 HIV-negative MSM over a three-year period published two papers about this PrEP-related continuum, one in Social Science and Medicine and another in the Journal of Acquired Immune Deficiency Syndromes (JAIDS).

“Research for years has shown that most gay and bisexual men are willing to take PrEP in an idealized situation where it’s provided for free and just sort of shows up at your doorstep. But uptake has been surprisingly slow,” says Jonathon Rendina, PhD, assistant professor of psychology at Hunter College in New York City and the lead author of the Social Science and Medicine paper. “We thought that men may be willing to take it but might not see themselves as needing to take it right now, and also that, even after that, part of the problem may be developing and executing a plan to go through all of the actual steps required to get on PrEP.”

Rendina and his colleagues found that just 28 percent of MSM who said they were willing to take PrEP actually planned to start taking it. They also found that those participants who were aware that PrEP is highly effective at reducing HIV risk (daily use among MSM is associated with an estimated 99 percent risk reduction) and those who saw themselves as good candidates for PrEP were more likely to intend to take it.

For the JAIDS paper, the study authors devised a five-stage continuum that separates high-risk HIV-negative MSM who are unwilling to take PrEP or who do not consider themselves good PrEP candidates from those who adhere well to the daily drug regimen. Then they analyzed data from 995 of the study participants who completed a 12-month follow-up survey to determine how far along in the continuum the men in the study progressed. 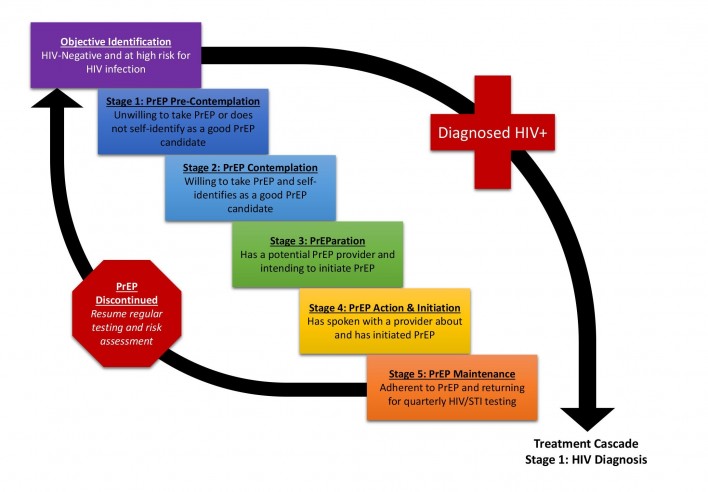 A total of 642 of the men (64.5 percent) were good candidates for PrEP based on Centers for Disease Control and Prevention (CDC) criteria. The proportion of that total that advanced through each of the five stages in the continuum were: 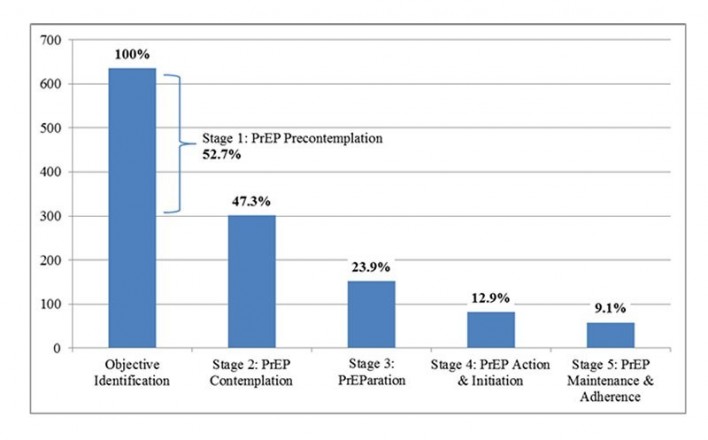 There is considerable drop off between each stage in the continuum.Courtesy of Wolters Kluwer