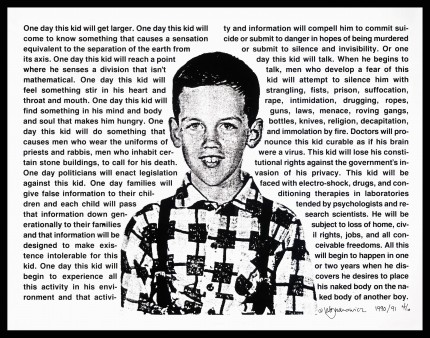 The Kid Stays in the Picture

When you think about AIDS art, the words joyous and youthful probably don’t come to mind—unless you have an eye like Danny Orendorff, who curated the exhibit One day this kid will get larger at Chicago’s DePaul Art Museum. (The title derives from the text of an iconic 1990 piece by David Wojnarowicz, a prominent artist and activist.)

“I really didn’t want to do a show that dwelled on the depressing aspects of all this,” Orendorff says, noting that death tolls in the ’80s and ’90s inspired a lot of the artwork from that period. “It was important to me to showcase life and pleasure and joy.”

Built around the theme of youth, the DePaul exhibition focuses not only on the formative ages from 13 to 24 but also on people born with the virus and HIV-positive parents raising children. Orendorff explains that he was also interested in “the intersection between contemporary HIV activism and the movement for Black and brown lives and also the disproportionate infection rates among youth of color.” As he gathered artwork for the show—it turns out that many of the final pieces are film shorts and digital photographs—three subthemes emerged: Childhoods, Educations and Nightlifes, and Pop Cultures.

Orendorff, who is tapped in to younger artists and activists, says that a lot of young people today think of HIV/AIDS “as being a disease that primarily affected white gay men in the ’80s and early ’90s.” Thankfully, a new crop of artists are updating that narrative to 2017. 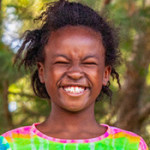 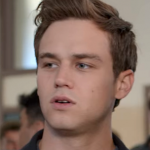 Portrait of an Artist