Two legacies reveal opposite responses to the epidemic. 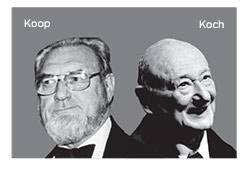 When AIDS first surfaced in the early 1980s, Ed Koch was mayor of New York City and C. Everett Koop was surgeon general of the United States. Both men died this year, and their obituaries tell of two responses to the crisis.