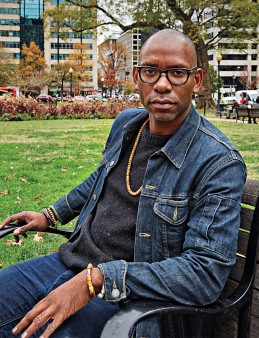 Kenyon Farrow is the global health policy director at Treatment Action Group (TAG), which is headquartered in New York City. The activist organization works to ensure that all people living with HIV receive medications, care and education. Based in Washington, DC, for the last three years, this HIV-negative ally has worked hard at TAG to link treatment access issues to a larger narrative of social justice and human rights.

“A lot of what I do now is advocacy within the U.S. government around HIV, tuberculosis and hepatitis C,” Farrow explains, “from the federal budget appropriation cycle to other kinds of legislation that we see as either useful or detrimental for people living with these conditions.”

For instance, Farrow recently helped mobilize three upcoming “End the Epidemic” initiatives in the South. He also helped TAG publish one of the first research papers of its kind focused on the impact of community-based organizations for people living with HIV in the United States.

The 42-year-old got his start in 1998 at the AIDS Task Force of Greater Cleveland, where he taught and organized sex-education workshops for high school students across his home city. The experience left him intensely interested in the social determinants surrounding HIV/AIDS.

“Infectious diseases arise within historical, social, political and cultural contexts,” Farrow explains. “The way that they become epidemics and the people who suffer has everything to do with those landscapes—HIV is no different.”

For this reason, Farrow has worked for groups such as the New York State Black Gay Network, Housing Works, Queers for Economic Justice and even POZ. He has spoken out on everything from mass incarceration, the war on drugs and HIV criminalization to the racist stereotypes surrounding the discourse of why gay and Black men in America are at such a high risk for HIV.

As the former director of communications for Community HIV/AIDS Mobilization Project (CHAMP), Farrow also worked to mobilize the LGBT community around social and economic justice policy issues. In the early 2000s, he advised groups like the Center for American Progress and the National LGBT Task Force to reach out to more marginalized groups.

Farrow has also written about the social determinants of HIV, economic justice and LGBT issues, and his work has appeared in publications such as The Atlantic, The Huffington Post, the Grio, Colorlines and many anthologies.

When asked about the future, Farrow says he hopes to see more mobilization around HIV and its links to social justice. “I feel proud to see some of the work I’ve been doing sprout up in organizations like Black Youth Project and Black Lives Matter,” says Farrow. “I’m looking forward to a new young generation of Black activists.”