From left: Larry Kramer’s latest novel, out January 2020; the activist at the GMHC Spring Gala in March 2017 (Novel) Courtesy of Farrar, Straus and Giroux; (GMHC) Courtesy of Matthew McDermott

The ever-angry AIDS activist and gay icon returns with a new novel in his American People series.

Here’s a brutal fact: Larry Kramer’s latest tome clocks in at 896 pages. Titled The American People: Volume 2: The Brutality of Fact, the latest work by the author-slash-AIDS activist-slash-gay icon continues his satirical recounting of our nation’s history, in which nearly everyone is gay or out to annihilate gay people.

In The American People: Volume 2: The Brutality of Fact, Larry Kramer completes his radical reimagining of his country’s history. Ranging from the brothels of 1950s Washington, D.C., to the activism of the 1980s and beyond, Kramer offers an elaborate phantasmagoria of bigoted conspiracists in the halls of power and ordinary individuals suffering their consequences. With wit and bite, Kramer explores (among other things) the sex lives of every recent president; the complicated behavior of America’s two greatest spies, J. Edgar Hoover and James Jesus Angleton; the rise of Sexopolis, the country’s favorite magazine; and the genocidal activities of every branch of our health-care and drug-delivery systems.

The American People: Volume 2 is narrated by (among others) the writer Fred Lemish and his two friends—Dr. Daniel Jerusalem, who works for America’s preeminent health-care institution, and his twin brother, David Jerusalem, a survivor of a Nazi concentration camp who was abused by many powerful men. Together they track a terrible plague that intensifies as the government ignores it and depict the bold and imaginative activists who set out to shock the nation’s conscience. In Kramer’s telling, the United States is dedicated to the proposition that very few men are created equal, and those who love other men may be destined for death. Here is a historical novel like no other—satiric and impassioned and driven by an uncompromising moral and literary vision. 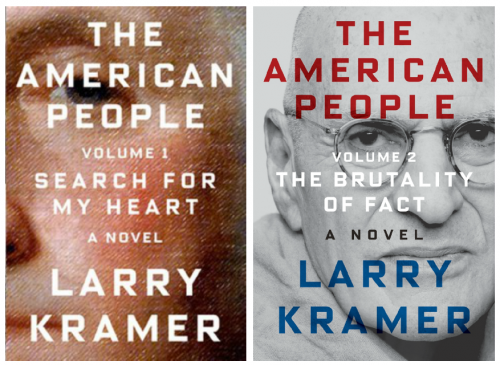 Both volumes in Larry Kramer’s “The American People Series”Courtesy of Farrar, Straus and Giroux

On the occasion of the publication of the book, Interview magazine had actress Ellen Barkin talk with the legendary activist and screenwriter. Barkin starred in the 2011 Broadway revival of Kramer’s AIDS play, The Normal Heart, about the early days of the epidemic and the founding of Gay Men’s Health Crisis (GMHC) in New York City (in 2014, the play was made into an HBO movie). Among other topics, the two discuss the AIDS Coalition to Unleash Power (ACT UP), the AIDS activist group Kramer cofounded in 1987.

“The minute we got pills, activism stopped,” Kramer recounts. “ACT UP self-destructed. They make all these movies about the successes of ACT UP, and it’s not a happy ending because you get the drugs, but that’s not the ending. The ending is everyone turning on each other. People got the drugs and went back to the lives they live, and that’s what got them in trouble in the first place. And, that’s where we are now, I think. Everybody thinks AIDS is all gone as an issue. But we still don’t have a cure.”

While discussing writing the history of gay people in America, Kramer had this to offer: “What pissed me off is that play Hamilton on Broadway. There’s no reference to his being gay. And he was. He and George Washington were lovers. I’m still mad that the guy who wrote the Hamilton biography references all these interactions that Hamilton has, which were obviously gay. And the biographer will write something like, “You’d think he would be gay, but he wasn’t.”

The Interview article is titled “Larry Kramer Is Still the Angriest Gay Man in the World,” and it features vintage Kramer.

To learn more about Kramer’s part in LGBT and HIV history, listen to the below episode from Eric Marcus’s podcast, Making Gay History. And check out its web page here for amazing pictures and links to further reading.

Finally, for a more literary offering, The New York Times interviews Kramer for its “By the Book” column, and in “Larry Kramer Leaves No Score Unsettled in an Epic’s Finale,” the newspaper reviews The American People: Volume 2. Dwight Garner writes: “This novel, like its predecessor, is overstuffed, packed with incident and narrators and digressions within digressions. Unlike an iceberg, it hides nothing under the surface. It’s a mess, a folly covered in mirrored tiles, but somehow it’s a beautiful and humane one. It’s the journal of a plague century. I can’t say I liked it. Yet, on a certain level, I loved it.”

To read much more about the activist in POZ, click #Larry Kramer.