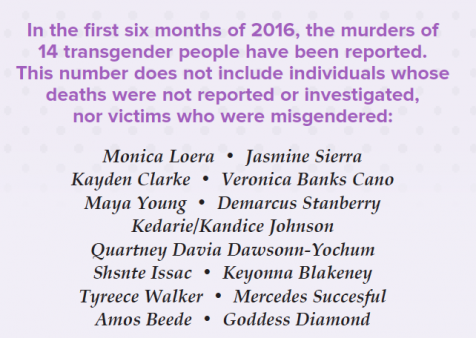 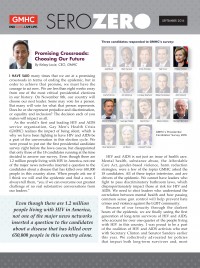 Pulse Nightclub billed itself as “the hottest gay bar in Orlando” but all of that changed on June 12, 2016, when 49 individuals lost their lives and more than 50 were injured, in what soon became the deadliest mass shooting in US history.

News of the attack soon spread around GMHC and the word “terror” is what came to the minds of many in the days that followed. Terror is a word the LGBT community is far too familiar with. At GMHC, we remember the terror that ensued when the AIDS epidemic struck in the 1980s and no one wanted to be near a gay person for fear of getting sick.

Today, we know the threat of physical violence, even death, is a daily part of life for the LGBT community. In a recent interview, Maurice White, a GMHC client, expressed that when he learned about Pulse, “I was frozen for two days and I thought of my personal history of violence.”

When it comes to violence directed towards the trans community, many other factors like intersections of racism, sexism and transphobia play a role. The hard part is the threat of violence. That is what kills you. Just walking around, you just can’t help think it’s a matter of time.”

Orlando was an incident that was intentionally perpetrated against victims just for being who they are, which makes this massacre a hate crime. Maurice supported this notion, adding that “violence to me is when you put somebody in a box and [are] biased and prejudice towards them. It’s when you don’t let someone express themselves as a human being.”

In an interview with Shelby Chestnut, Co-Director of Community Organizing and Public Advocacy at the New York City Anti-Violence Project, she discussed the annual Hate Violence Report which recorded 24 hate violence homicides in 2015, a 20% increase from 2014. Of the 1,253 survivors who reported being victims nationally, Shelby noted that “the majority were gay, youth, and people of color.”

When it comes to violence directed towards the trans community, many other factors like intersections of racism, sexism and transphobia play a role. Transgender Advocate Brooke Cerda noted “I know last year in the US we lost 23 women…and in some countries it is 23 women in one month. Everybody is jumping on the bandwagon of ‘progress, progress, progress’ and there’s a lot of misinformation [in] saying that. I’m worried because a lot of trans women, especially the younger generation of girls, buy into the thinking that it’s a more accepting world for trans women and it’s not. We stand at the intersection of being women first and then trans. There’s no way we can escape those two as much as we want. We cannot even thank our ancestors [trans women] for all of the things they did for us. We don’t have the money or resources to thank our elders. The hard part is the threat of violence. That is what kills you. Just walking around, you just can’t help think it’s a matter of time.”

So what do we do?

We need to change laws and culture to rid our society of things like discrimination, harassment, transphobia, and homophobia.

At GMHC, we are constantly working to support and create an affirming and safe space where our more than 10,000 clients can access comprehensive quality care and support, regardless of sexual orientation or gender identity. This work is supported by the agency’s senior management, led by CEO Kelsey Louie and the Board of Directors.

Soon we will be adding staff members’ gender pronouns to individual email signatures. The practice of asking individuals what pronouns they use allows us to not make assumptions about a person’s gender identity and to promote awareness of transgender and gender non-conforming communities. We’ve hosted transgender awareness trainings to promote inclusion and share proven best practices as an effective way to enhance cultural competency. And, we have two gender neutral bathrooms on site.

But we know that at the end of the day, our clients and staff leave GMHC and are prone to hate motivated violence. The time is now to utilize the momentum and power the LGBT community has to pass explicit non-discrimination protections at the state and federal level along with creating life-saving and medically necessary health care for everyone. Our education system must be safe for transgender students, and law enforcement must improve their responses to crimes committed against transgender people.

These are not new asks, but the time is now.

As GMHC CEO Kelsey Louie said following the Orlando tragedy, “The love and pride our community has is an example to all Americans of how we will once again come together and take care of our own. When the world turned its back on us as HIV and AIDS ravaged our community, we defiantly stood up and fought back. When they said you can’t marry the one you love, we stood up and won the right to say ‘I do’…It is time for us to once again stand up and say you can’t scare us back into the closet. We will love proudly, we will dance proudly, and we will march through 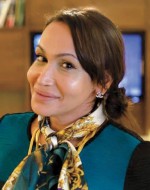 the streets proudly this month and every month. Our hearts are broken, but our spirits will fight on in honor of those we lost.”

From the September 2016 issue of SeroZero by GMHC. To read the issue as a PDF, click here.

When COVID-19 Offers an Excuse to Violate Human Rights